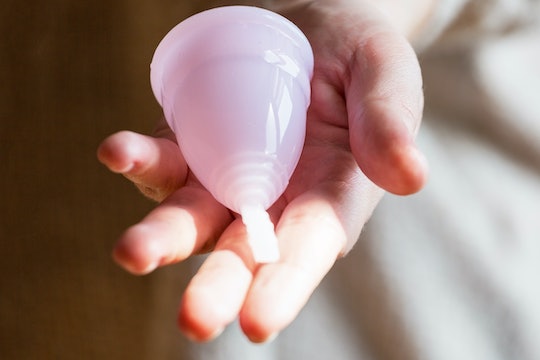 I bet I'm not the only one who has witnessed tampons used as nosebleed stoppers and pantyhose fashioned as slings. But neither of these things prepared me for this latest inventive use of women's toiletries. What I am talking about, exactly? Look no further than this viral Reddit post, which details the twists and turns of a dad who mistook a menstrual cup for a toy after his son stumbled upon the device during his mother's work trip.

"My wife is working out of town for a couple weeks. Sometime over the weekend I noticed my son playing with this little silicone cup that kinda looked like a tulip," the hilarious post published on Sept. 19 to "Dear Reddit, Today, I F***ed Up" begins.

Instead of questioning his son about this supposed toy, the anonymous user took delight in all of the creative ways his son used the cup. "Over the next few days it helped the Paw Patrol save the town, it was a treasure chest holding tiny pebbles guarded by pirates, a force field protecting a space ship," he described.

He continued, "It came with us to the park, grocery shopping, and even out to dinner one night. I loved that it had its own little satchel and assumed it just went to a play set."

When time for his son's show and tell came around, of course his top choice was the "silicone cup." The dad thought nothing of it, at least until his kid's teacher pulled him aside after school, referring to the presentation as "interesting."

When the dad said that the father-son duo had "been playing with that thing for days," the teacher had to break it to him that it was, in fact, a menstrual cup used to collect blood.

"It just...stays in there?" the he replied, confused. "I don’t think that would, uh, fit....too, uh...comfortably...there." But his wife, who has since returned from her work trip, reassured him that it "fits just fine" and that she "doesn't even feel its presence after its in position."

In response to comments the viral post generated, his wife asked for him to clarify a few things, especially where it concerns his knowledge about menstruation. "My wife has been reading the comments and insisted that I clarify that I know all about her cycle," he wrote in the updated post. "We are TTC currently and, just as it was with our son, I know when she’s ovulating, I track her cycle with her and (with our son at least) sometimes help give her the hormone shots."

He also clarified that, growing up with four sisters, the only "devices" he knew of were "to absorb the blood," hence his confusion.

Others have not hesitated to jump in on the viral Reddit thread, which has received 58.9K votes since it was posted three days ago.

"Reminded me of a boy in my son's first grade class... The little entrepreneur was selling telescopes for a nickel each, and sold out," one person responded. "Sadly, they were his mother's used tampon applicators."

Another person chimed in: "When we were little, my brother and found my dad's condoms and we spent an afternoon on the front lawn playing with them. Worst water balloons ever. And why are they individually wrapped?"

The dad has since bought a replacement menstrual cup for his wife, but is still enjoying the hilarity of the situation as his son continues to play with his so-called toy. "My son is non the wiser and is having a tea party with the cup right now," he concluded the post.