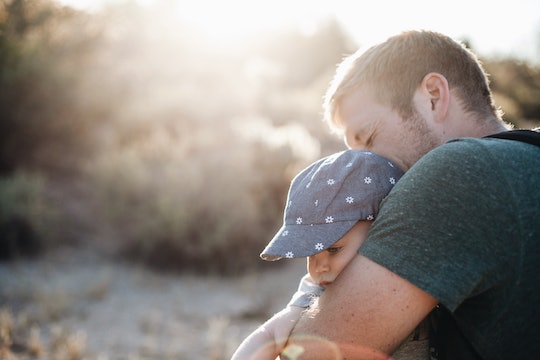 It's not uncommon these days to see a social media post go viral: whether it's a moving story of human compassion, a hilarious interaction, or an act of injustice that needs to be witnessed, viral content is kind of just part of life online. Sometimes, though, a post goes viral because everyone who sees it goes, "Why didn't I think of that?!" That's what happened to Jake White. You have to see this stay-at-home dad's viral parenting hack.

White, who lives with his wife Jen in Ohio, is a stay-at-home dad to 2-year-old triplets: Xavier, Stella, and Jude. He told TODAY that he takes the triplets everywhere, and they're generally very well behaved. But when it comes to sharing snacks — well, they are toddlers.

In a Facebook message to Romper, White (who has a background in art and design) said of his genius carseat hack:

I came up with the idea out of sheer necessity. I'm naturally creative and don't mind being different, and that combination allows me to problem solve with triplets. I have tons of dad hacks, as others would see it, but it's normal life for me.

White made dividers, which he placed between the tots' carseats, made of foam: "just strong enough to keep the kids separated. The kids aren't strong enough to break it from a seated position yet," he told TODAY. He posted about his solution on Facebook and the post immediately went viral.

Parenting is definitely an area where life hacks come in handy. Whether it's something that saves time, money, energy, or enhances a pre-existing product so it lasts longer (always a plus), so-called "hacks" can be life-savers. Many hacks are just practical: like tracing your kids' feet so you don't have to take them with you when you go shoe shopping, or using zip ties to affix baby gates to your staircases, so you don't have to use nails.

Some hacks that were originally meant for kids are actually really helpful for anyone: like putting a muffin tin liners on popsicle sticks to avoid dripping (grown ups eat popsicles, too! And we don't want sticky hands either) or covering those auto-flush toilet sensors with a Post-It note so it doesn't flush before you're done.

When it comes to his brilliant life-hacking skills, White says he enjoys the creative, practical challenges of parenthood. Even though the set-up in his backseat only took him five minutes to install, the task of figuring out what materials to use, how the design would work, and making sure that it would be safe and effective certainly required some analytical thinking.

"Parents get it when it comes to problem solving," White told TODAY. He reported that after a trip to the drive-thru, his hack worked beautifully.

"And . . . no more car fighting," he wrote on Facebook, "The guys at the drive-thru said it was genius. A day in the life of triplets."

So, what hack is White planning on next? "Keeping a potty in the van," he told Romper via Facebook message, "You never know when the urge to poop happens with a two year old."