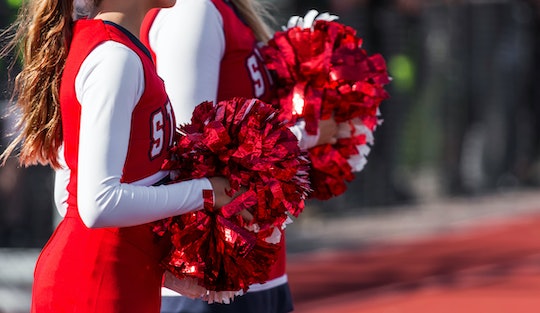 There's nothing I love more than a parent who supports their kid's interests with all of their being. So it's safe to say my heart is full after watching this dad performing his daughter's cheer routine from the stands, copying every single move perfectly. The adorable moment has since gone viral and now the dad is affectionately known as "cheer dad" by his new fans.

In a video shared to Facebook Friday, Nov. 1, Virginia dad Rolland "Hekili" Holland is seen jumping up and down as his cheerleader daughter, Mackenzi, runs onto a football field with her squad. As the marching band begins to play — Holland, who is in the stands — begins to mimic Mackenzi's routine, all the way from shouting "go Falcons!" to waving around his imaginary pom poms. It's hard to sum up the expertly pulled off performance in a few words, but it's obvious he nailed it.

"This guy right here needs to go viral," fellow parent Scott Willard captioned the video, which has been viewed over 3 million times since Thursday. "By far CHEER DAD OF THE YEAR!!!!!! This dude rocks!!!! GO YORK FALCONS!!!!"

But Holland isn't just another proud dad. As it turns out, he asked Mackenzi to teach him the routine after three players from another high school died in a car accident.

"There are three schools in our community that are really close to each other," Holland told TODAY Parents. "On the weekend prior to the game, unfortunately, three players from another high school were killed in a car accident, so it was a very somber week leading up to it."

He continued, "People have reached out saying this was what the community needed and that it provided a bit of hope and help with overcoming that sadness."

Holland, who told Good Morning America learning the kicks was the hardest part, said about the experience, "I’ve always loved the atmosphere of high school and college football. The band, the excitement, everything. It just another way to have fun and show support.”

As for Mackenzi? She loved her dad's performance. “I smiled the entire time,” she told The Washington Post. “I was like, ‘You go, Dad.’"

The public also appreciated Holland's efforts, with one person tweeting, "Get him some Pom Poms!"

Someone else said: "Every kid deserves a dad (or an uncle, or grandpa) who cheers for them as much as this guy does."

Another user commented: "#cheerdad makes me wish every night was a Friday!"

And one supporter on Facebook wrote: "I love this dad!!! His daughter is a lucky girl. She's probably wanting to crawl into a hole right now (teenagers), but she will appreciate this later when she's a mom. Great job, dad!!!"

My dad would never do anything like this in a million years, but he does support me with the same level of enthusiasm, albeit minus the dancing and cheering. And maybe this is why I'm loving all the praise for "Cheer Dad" — he's heartwarmingly reminiscent of every supportive parent out there. Go Falcons!