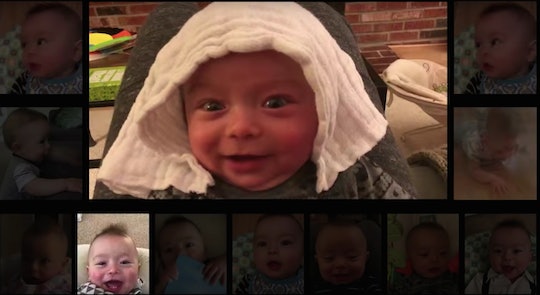 Viral videos abound on YouTube, but one father-son duo stands above the rest after mixing classic rock with infant cuteness to make something just wonderful. A little guy named Ryan is famous now after his dad recreated "Thunderstruck" using his baby's sounds. Dad Matt MacMillan recorded little Ryan for a full year, then waded through endless videos to find the sounds needed to piece together the 1990 AC/DC hit song.

The video, posted to YouTube on Jan. 14, has since racked up over 2 million views and hundreds of comments. "A few things I can say about this," one person wrote. "1. You REALLY love your son and sure spend quality time with him. 2. He will be a crazy AC/DC fan just like his dad 3. Your ability to put together puzzles is beyond human. 4. Are you freakin' nuts man? Anyway, super job." Others echoed these sentiments, praising MacMillan for his commitment and urging him to play the video at Ryan's wedding one day.

For those interested in the how behind this incredible video, MacMillan posed a second video explaining his process, writing that "it took forever." After a year of recording every little sound that Ryan made, MacMillan sorted through the clips and organized them by tone. First deleting those without a tone, he was left with 83 videos to further sort by pitch using his electric piano for comparison and deleted any that repeated. He then organized the remaining 21 clips into the musical masterpiece you see on YouTube today.

Each sound clip of baby Ryan has a corresponding note in "Thunderstruck," but the originals pale in comparison, in my humble opinion. Wouldn't music be so much sweeter if all cymbal crashes were replaced with teeny baby sneezes? And the sound of Ryan's hands slapping the floor when he's crawling is so much cuter than a boring old snare drum.

All of these adorable little coos, sneezes, whines, and babbles make up one seriously impressive rendition of "Thunderstruck." Considering the time and labor that went into bringing this musical masterpiece about, it could be some time before the world is blessing with a follow-up video. But, fortunately, MacMillan has years to document little Ryan's life and turn it into music. In the meantime, feel free to watch the "Thunderstruck" video on repeat — that's what my toddler and I will be doing, anyway.