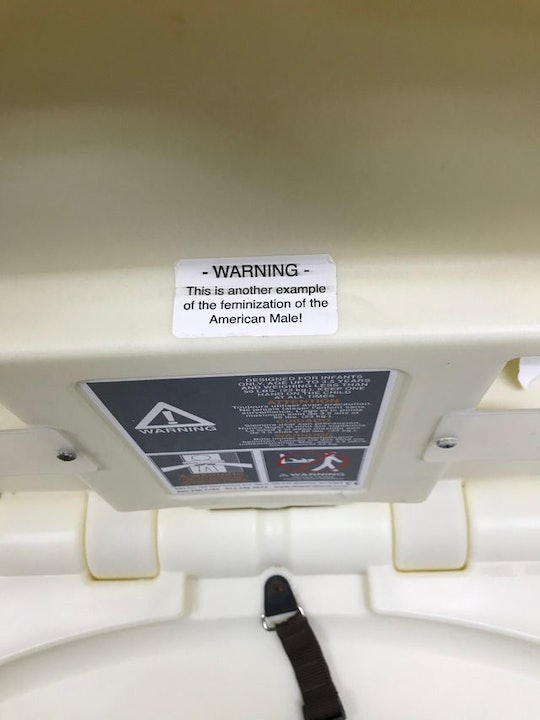 Few things in life are as irritating to me than being out in public with my family and noticing the baby needs a fresh diaper — only to have my husband return with a still-stinky baby because there are no changing stations in the men's restroom. More often than not, I grab our little one, head off to the women's bathroom, and lo and behold: there's a changing table. Because I guess only moms change diapers? Never mind that it's 2019, or anything. Nope. Wiping little bums is clearly meant for the women folk. And if that isn't bad enough, then this dad-shaming sticker found on a public restroom changing table will leave you fuming.

As The Daily Dot reported, an indignant dad took to Reddit after discovering an offensive — and extremely sexist — sticker on a baby changing table in a public restroom. "Saw some Dad shaming at our local Rural King," he wrote, "Caring for your kids makes you more of a man, not less of one." The original poster also shared a photo of the sticker, which read: "WARNING: This is another example of the feminization of the American Male!"

Um, what?! Let's just say people definitely had some feelings about the message.

One Redditor commented, "I'd put good money on the wager that this sticker applier has never changed a diaper before, whether or not they are anyone's biological father. If you're a willing and involved parent - you won't wait around for your spouse or hired help to change the diaper of a crying, uncomfortable infant, full stop."

A Reddit user after my own heart wrote, "Very few things make me angrier than dad shaming, especially this stupid nonsense 'taking care of kids is a woman’s job' Neanderthal backwards bullsh*t."

Yet another person snarked, "BE A MAN, gentlemen. Let your kids sit in their own sh*t until Mom comes home. If you change a diaper, your testicles will shrivel and your d*ck will fall off."

Another Reddit user chimed in with, "How insecure do you have to be in order to, at the least, purchase these and carry them around with you when you go to public restrooms? At worst, this person made these himself. All of that mental and physical energy plus money wasted on such trivial stupidity."

Like many of the commenters, I'm having a hard time figuring out why anyone would got through the trouble of buying/making stickers to slap on changing tables in public restrooms. Is it a direct response to well-known actors calling for more changing tables in men's bathrooms? Like John Legend did earlier in June?

The world may never know why these dad-shaming stickers exist. But I'd still like to point out that more dads than ever are staying home with their children. Not to mention, fathers are more engaged overall in their kids' lives, too.

So sorry to burst your bubble, angry, sexist, sticker-wielding people of the world— but yes, dads change diapers. But only the ones who love their children, respect their partners, and view themselves as decent human beings. And there's absolutely zero shame in that.