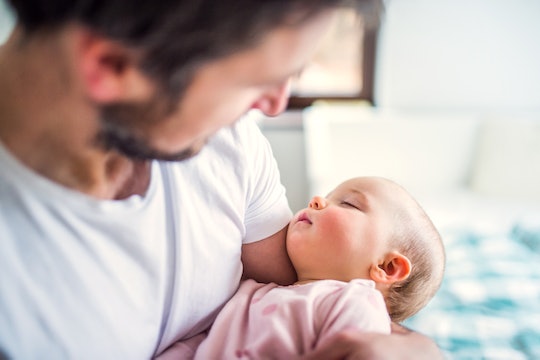 When society talks about having babies, they present it as the happiest time of your life. For many parents, it is a positive occasion, but that expectation of only being happy can make it difficult for parents to open up about their mental health — including men. A new study highlights that dads also suffer from postpartum depression and shows why supporting all parents needs to be a priority. Transitioning into parenthood isn't always easy and that's OK, but people need to feel comfortable and supported when receiving help.

Nearly one in 20 new fathers experienced depression following the birth of their child, according to a study published in JAMA Psychiatry, and researchers decided to explore the impact this can have on their kids.

For the study, researchers used information of more than 3,000 families in Bristol, UK collected from the Avon Longitudinal Study of Parents and Children - an ongoing cohort study launched in 1991, as noted by the study's abstract. Researchers found that there seems to be a connection between postpartum depression in dads and depression in their daughters later in life, as reported by EurekAlert!.

Professor Ramchandani, who co-authored the study, said, according to Eurek!Alert:

This link was not found in sons, however, only daughters. Researchers don't know why post-natal depression in fathers only has an influence on their daughters, but they proposed a few theories. According to MedicalXpress, one reason could be that PPPD in dads can sometimes go along with maternal depression. If one or both parents is experiencing depression following a child's birth, it might affect how they interact with their new baby.

In addition, researchers think there might be some connections to parts of father-daughter relationships as daughters grow older and reach adolescence, according to MedicalXpress.

Although more studies need to be done to fully understand the link between post-natal depression in men and their daughter's depression in adolescence, this study still highlights that men experience, and need help with, depression, too.

Men can commonly express their depression through anger, aggressiveness, irritability, and anxiety, as San Diego-based psychology David Singley told PsyCom, adding, "They are also susceptible to other manifestations such as increased use of substances (drinking, drugs), addictive behaviors such as gambling or video games as well as physical manifestations like headaches and stomach problems."

Knowing how mental health issues may express themselves differently in people is important so that people can identify possible signs. Mental health isn't always easy to talk about, but this study shows how important it is for both parents to be supported.