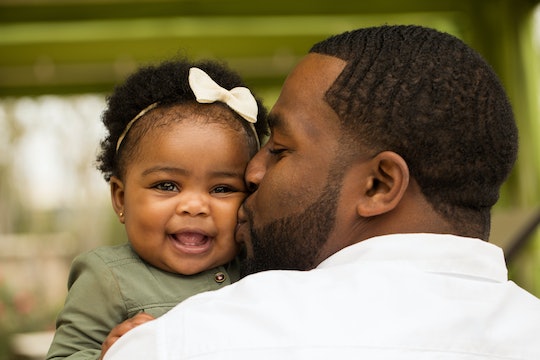 Dads Are More Involved In Their Kids' Lives Than Ever Before, According To This New Study

There are certain ideas about parenthood that are entrenched in society. More mothers are taking on the breadwinner role, but are still expected to take care of the home. More fathers are choosing to stay at home, but are still expected to be the parent working in the office. But those attitudes are shifting, slowly. More moms and dads are ignoring gender stereotypes all together. Take, for example, this new research that shows dads today are more involved in their kids' lives than ever before, and it's changing the way people think about fatherhood.

A new study published Tuesday in The Journal of Marriage and Family found that most fathers today are spending more quality time with their children than they were years ago, according to Eureka Alert. In particular, researchers from Brigham Young University and Ball State analyzed national survey data on nearly 2,200 fathers of children between the ages 2 to 18, and discovered that the majority of dads were more "physically" and "emotionally" engaged with their kids, according to Eureka Alert. Dads are more present at important events, as the study found, as well as providing more emotional support and warmth.

The findings, then, suggest a change not only in how men view their roles as fathers, but how they view masculinity itself, according to researchers.

Study co-author Kevin Shafer, a sociology professor at Brigham Young University, said of the findings, according to Phys.org:

We found that today's dads spend more time, provide more care, and are more loving toward their kids than ever before. Most dads see themselves as playing an equally important role in helping their children as mothers do.

Shafer and his team's findings fall in line with previous research that shows fathers are taking a more active part in their kids' lives. Dads spent more time on child care a week in 2015 than they did five decades ago — seven hours compared 2.5 in 1965, according to The Pew Research Center. Not only that, but around 57 percent of dads reported that being a parent is central to their identity, while 54 percent of fathers surveyed said they found parenting rewarding "all of the time," The Pew Research Center found.

Still, Shafer noted, according to Phys.org, "There is a group of dads who believe they are to be breadwinners, disciplinarians, and nothing more."

To that last point, the researchers behind the recent Journal of Marriage and Family study did find a link between toxic masculine behaviors and lack of engagement. Specifically, after assessing the fathers' views of negative masculinity, according to the study, they discovered that those participants who displayed the more problematic aspects of masculinity — such as "aggression, detached relationships, not showing emotion and failing to ask for help," as explained by Phys.org — also spent less time involved with their kids, according to the study.

Shafer said of these results, according to Eureka Alert:

It's important to understand what masculinity is and is not. In some circles, when people hear terms like hegemonic or toxic masculinity, they think those are attacking all men. Not so. There are some very beneficial aspects of masculinity — being goal-oriented or being loyal, for example.

But, he added, their research suggested that the negative parts of traditional masculinity these fathers exhibit "hurts families," according to Eureka Alert. In fact, previous studies have shown that reinforcing gender stereotypes can have a negative impact on a child's emotional and physical well-being, which can carry into adulthood, according to USA Today.

That's why it's important and refreshing to learn that more fathers are taking a more active and engaging role in their children's lives. By being emotionally present, dads are nurturing their kids' emotional well-being. They are giving them the opportunity to grow into healthy, well-rounded adults. And that means that, when they become parents, they will be there for their children, too.

More Like This
The Best Travel Tips For Solo Parenting
Winter Travel Tips For Families
Tips to Beat Jet Lag, For You & Your Kids
40 Valentine's Day Outfits Your Girls Will Adore Showing Off This Season
What Parents Are Talking About — Delivered Straight To Your Inbox