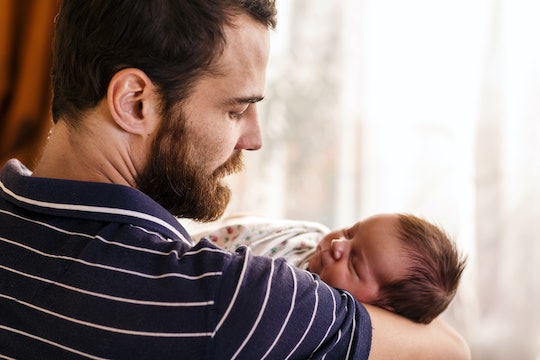 Dads Aren't Taking Paid Leave Even When They Can, & Here's Why

The United States is the only industrialized country that does not offer all citizens federally mandated paid family leave, but even when companies do offer the benefit, fathers aren't signing up for paid parental leave, according to new research. And it's not because men don't agree with the policies offered to them. It's actually their finances and the pay that are determining how much time they're taking off, if any at all. But when both parents don't take the paid leave available to them to care for their newborn children, the gendered stereotype that mothers should be home raising their families and fathers should be the breadwinners is only reinforced.

Ball State University sociology professor Richard Petts conducted the researched titled, "Paid Paternity Leave-Taking in the United States." And he found that current U.S. paternity leave policies actually seem to contribute to the inequality between men and women, according to Industry Week. While many companies offer paid paternity leave, the pay isn't always enough for some men to take the time off.

"Paternity leave is especially important to study because it represents a version of family leave-taking that is rare in comparison to maternity leave, yet it offers substantial possibilities for alleviating work-family conflicts and encouraging increased father involvement, mothers’ well-being, and gender equity in the divisions of domestic and paid labor responsibilities," Petts told Industry Week.

Parental leave in general is important. But just 14 percent of civilian workers had access to paid leave last year, mostly thanks to state laws and progressive employers, according to the U.S. Bureau of Labor Statistics. Among 41 developed countries, the United States is the only one that does not have a federal law requiring paid leave for new parents, the Organization for Economic Cooperation and Development reported. The law does allow workers to take up to 12 weeks of unpaid leave without risking losing their jobs after having a baby, but most developed countries offer an average of about one year of paid leave, according to Business Insider.

There is a comprehensive body of research that illustrates that children benefit when both their parents have paid time away from work to spend time with and take care of them. But the vast majority of men don’t take more than a week off when they do have it, and they’re less likely to take time for a second child, Bloomberg reported.

The new research found that 47 percent of the male respondents were in favor of their paternity leave policies, but only took one week or less off. And only 14 percent of fathers who took leave used more than two weeks, Industry Week reported. The study also found that new fathers who have higher salaries are more likely to take advantage of paid-family leave policies than men who work part-time. Those who make less don't necessarily feel like they can take the time off, even if it is paid, since it might not be enough.

"This privileged position may suggest that the opportunity cost of taking leave is higher for fathers with high incomes than for fathers with lower incomes—especially if wage replacement is less than 100 percent," Petts explained, according to Industry Week. Plus, higher incomes may be linked to greater benefits and autonomy in one’s career.

Women, of course, face the same financial challenges — only exacerbated thanks to the gender pay gap. But there's the expectation that they'll stay home to care for their children regardless of the pay they will or won't receive. There are societal pressures on both men and women to fulfill these gender roles in the home and in the workplace, and the poor structure of paid parental leave policies (even though it's a good thing that they are offered), is a major contributor.