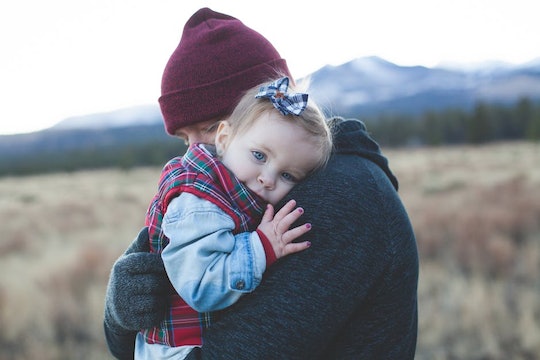 It's no secret that many Americans dream of escaping to Europe for vacation, retirement, or even just to move to in order to escape the realities of life in the United States. Life really is much different across the pond, and when it comes to quality time with your kids, it's for the better. According to a new report, one European country is ahead of the rest: Finnish dads spend more time with their kids and the reason why probably won't surprise you.

The new report from the Organization for Economic Co-operation and Development on gender equality has found that Finland is "the only country in the developed world where fathers spend more time with school-aged children than mothers," according to The Guardian. And it's not just a couple of seconds either — it's about eight more minutes per day that fathers are spending with their kids, The Guardian reported.

In Finland, thanks to progressive policies the nation has in place to encourage happy families, mothers and fathers can take the time to play with their kids, without having to worry about paying the bills on time. Speaking to The Guardian, Finland’s minister of family affairs and social services, Annika Saarikko, explained that "this is a question of gender equality, but it’s more a question of the rights of the child."

Truly, by focusing on the children at stake, Finland has been able to break the mold on gender equality. "This is not about the mother’s right or the father’s right – but the child’s right to spend time with both parents," Saarikko concluded.

As The Atlantic reported in 2015, "More than half of working parents say they find it hard to balance their careers and family lives," in America, and there's not a lot happening right now to help improve those statistics.

But if those in power to want to make some much-needed changes in the United States, looking to Finland's practices would be useful. As the country has been ranked as the second-most equal nation in the world for 2016 — with only Iceland beating it out — Finland clearly knows a thing or two about effective policy to help better serve the needs of the child. And the nation's maternity leave policy is pretty amazing as well. According to Business Insider, a woman's maternity leave in Finland can start seven weeks before her due date, and extends well beyond that:

After that the government covers 16 additional weeks of paid leave through a maternity grant, regardless of whether the mother is a student, unemployed, or self-employed. The country also offers eight weeks of paid paternity leave.

Paulina Ahokas, director of the Nordic country's largest concert and event venue, Tampere Hall, believes that the Finland's approach to equality began a long time ago. "Finland was a poor country where women worked alongside men, and we all had to work together after the war to pay off our debt to the Russians," she told The Guardian. "But women have also been involved in decision-making for a long time — we believe that [leads to] the best decisions."

Additionally, the Finnish government is committed to helping out new parents and minimize as much of the stress as they can. While medical costs for delivering a child are a pittance compared to those in the United States, that isn't all Finland offers new parents. According to The Guardian:

For the past 80 years, the Finnish state has also gifted parents with a “baby box”, filled with newborn essentials including a sleeping bag, mattress, outdoor gear, toiletries and playsuits — all in gender neutral colors, of course. While families can opt to receive €140 instead, 95% of first-timers take the goodies, as they are worth much more.

While fathers in America might be jealous of those in Finland who are able to spend more time with their kids, it's not their fault. The way Finland operates seeks to minimize gender inequality allows parents to give their give children the best of both them. Only time and a lot of work towards progress will tell, but hopefully one day the United States will be no different.