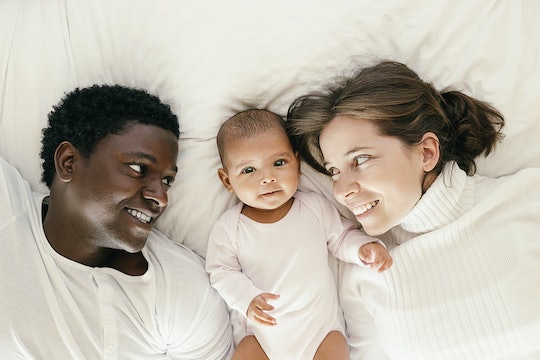 Dad's Mental Health Has a Significant Impact On Their Children, Study Finds

Many people have noted that there's a lack of information around fatherhood and mental health. Thanks to a new study, the world finally has more information. In a new study, researchers have found that a dad's mental health has significant impact on their children, and here's why it's important.

New studies have allowed researchers to begin examining the complexity of the child-parent relationship. In one study, it was found that children with depressed mothers may have different responses to stress, altered immunity, and be at a greater risk of psychological disorders.

Mental health is complicated, primarily thanks to its position as a taboo topic in society. Many people feel uncomfortable discussing mental health, but it can't be ignored. The brain is an organ and, like any other part of your body, it needs to be taken care of.

But, not much was being done to fully explore the impact that a father's mental health has on their children. This neglected area is important to understand, in order for scientists to get a better idea of how mental health impacts families.

New research conducted by the Parenting Research Center has helped highlight the mental heath of Australian fathers. As outlined by Qrius, researchers found that one in five dads have experienced symptoms of depression and / or anxiety since having children.

The researchers drew their data from the Parenting Today in Victoria survey, which received responses from 2,600 parents, 40 percent of whom were dads, according to Qrius.

In their research brief, the Parenting Research Center noted that fathers with poorer mental health reported having lower levels of parenting confidence. This confidence, the center noted, is related to a father's interaction with their children:

Less confident fathers perceived themselves to be less consistent and more impatient and critical with their child. They also reported engaging in activities with their child less often and were more likely to say they argued.

Although Qrius noted that the number of fathers reporting symptoms of depression and anxiety were lower than mothers, the fathers surveyed were less likely to identify someone they trusted they could turn to for advice.

This, in part, speaks to broader themes when navigating men's mental health. In 2016, a survey showed that men are less likely to seek mental health help. The Mental Health Foundation survey found that 28 percent of men admitted they had not sought medical help, compared to 19 percent of women, according to The Guardian.

In addition, The Guardian reported that more than a third of men either waited more than two years or never chose to tell friends or family about their problem. This survey, as outlined by The Guardian, pointed to the need for a cultural shift, particularly when discussing masculinity and the role it plays.

However, another issue, as noted by Tonic, is that the world of mental health was never principally designed to provide real assistance. Think back to the ages of female hysteria, where women showing any emotions were diagnosed and typically sent away.

"Basically psychotherapy was originally created by men to treat women,” Ronald Levant former head of the American Psychological Association and professor at the University of Akron, reportedly told Tonic.

This means that, even as society is caught in playing a world of catch up, these past meanings still have real effects today. The reality of men's mental health is alarming, with men completing suicide at more than three times the rate of women, according to the American Foundation for Suicide Prevention.

If researchers know that a mother's mental health has impact on children, then obviously a father's does too.

Mental health is tricky to navigate. It's not easy to discuss and the resources for treatment are not always accessible. Currently, many cultures are engaged in a sort of shift, attempting to make the topic much less taboo. And, with time, this will hopefully lead to more understanding and better results.