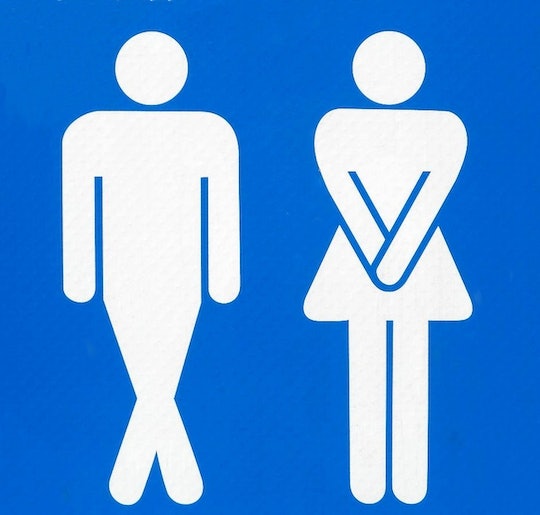 When I was in kindergarten, a classmate (accidentally) poked me in the eye and I had to wear a sticky patch over it until it healed. It was kind of a drag, and embarrassing. Then it turned awesome, because my friends started wearing band-aids over their eyes in solidarity. I was a trendsetter! I was invincible! Most of all, I knew I was loved — and that's why one Utah dad's response to his daughter's "accident" at school seriously made my day.

But the world never would have known about this amazing (and seriously cute) act of fatherly love if it weren't for the powers of social media. On Friday, 17-year-old Lucinda Sowards posted a series of photos of her dad, Ben Sowards, before and after he headed out to pick up his other younger daughter at school. He looks mostly normal, except for the big wet splotch on the front of his pants.

"My little sis had an accident today at kindergarten & this is how my dad left to pick her up so she wouldn't feel so sad/embarrassed," Lucinda wrote. The next two images show Ben Sowards and 6-year-old Valerie smiling together, one with the remnants of Sowards own "accident" covered up, with other with it in full view.

In an interview with BuzzFeed News, Sowards said that his wife had told him that Valerie was crying at school after she had an accident there, and she wanted to go home. "My heart kind of just broke," he told the outlet. So, he doused his khakis in water and headed to the school to pick her up, promptly asking his daughter for her backpack so he could hide his accident.

"She was laughing about it," Sowards later said, according to BuzzFeed. "It was so funny."

In her Twitter bio, Lucinda identifies her as both the oldest of 11 and a "foster care advocate" — so it's safe to say that her dad has a lot of experience trying to make kids feel better. And the internet went crazy over his endearing scheme this time.

It's pretty much guaranteed that Sowards didn't do this for the 15 minutes of internet fame, though. Which, of course, is what makes it such a delight in the first place: He wanted only to make a little girl laugh instead of cry and to remind her of how much she's loved — and he was, it seems, wildly successful.