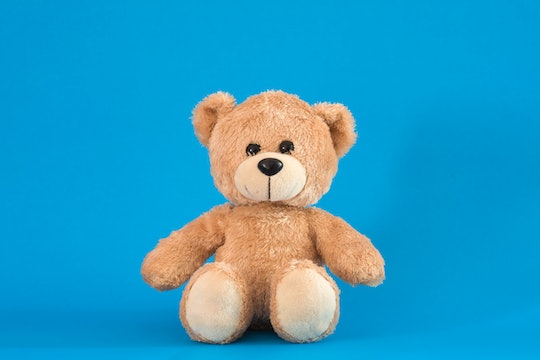 It's no secret that some toddlers can be picky eaters, refusing to eat their vegetables or the dinner you carefully prepared. While there are many different ways to deal with this frustrating issue, it appears that some parents are "beating up" their kids’ stuffed animals to get their children to eat. And in response to this disturbing trend, one dad in Florida made a video to illustrate that there are better ways to inspire obedience in children and many parents have applauded his take.

There are plenty of questionable parenting trends out there, but the phenomena of adults punching and hitting their kids' toys to achieve compliance might take the cake. Not only is it arguably juvenile, but it could potentially cause emotional distress, especially for those kids who are deeply attached to their stuffed animals. And last but not least, it seemingly demonstrates to children that violence is an effective tool to get what you want.

So, where did this trend start? It all began with a man struggling to get his young nephew to eat, a battle that was filmed and shared to Twitter on June 19, as the Orlando Sentinel reported. After the man's nephew refuses to eat, he tries to feed a nearby Mickey Mouse doll to achieve the desired result, according to Mashable. And when that doesn't work, as a video on Twitter shows, he begins punching the stuffed animal repeatedly, a move that motivates the seemingly stunned toddler to eat.

"When kids don’t wanna eat… this is what you gotta do,” the man captioned the video which has since received over 100,000 retweets as of Tuesday. The Twitter user did not immediately respond to Romper’s request for comment.

Other parents have since adopted the trend, which dad of two Christopher Duett found upsetting and unnecessary, according to BuzzFeed News. And to illustrate his feelings, Duett took to Twitter to share a response video in which he successfully got his young child to eat by using positive reinforcement.

"Hey dumb f—ers using stuffed animals to exhibit negative reinforcement to get your kids to do something, watch this...," he captioned the video.

The clip shows Duett using his son's penguin stuffed animal to encourage his son to chow down, saying things like, "penguin wants some," and "penguin likes it," to name a few examples. Duett then helps his son "feed" penguin, which appears to do the trick. After Duett's son eats the food, he supports him by saying, "Wow, good job. Good boy."

Duett's video goes to show that, with a little love, patience, and creativity, you can inspire positive behavior in your children. Bravo.

After Duett's PSA went viral — it currently has more than 71,000 likes and nearly 25,000 comments — he took to Twitter to address the positive messages he has received.

"Also I’m getting a lot of attention and credit for this, though this should be the standard & not the exception," he tweeted. "Truth be told, my wife and I are privileged to raise our kids together. Without my partnership with her, I wouldn’t be as good of a man I am now. Be good to your kids!" Talk about a lovely takeaway, right?

"My clinical therapist mom who specializes in kids is sending you a long distance high five and a thank you for being what is right with the world," one person penned.

"Now this is parenting I can get behind," someone else said. "I was big mad when I saw the dude getting his child to eat out of fear of being hurt like his stuffed animal. THIS IS HOW YOU DO IT!"

One person commented: "My mom used to do this to me, and my dad would use punishment to enforce it and the outcomes with my relationships with them are completely different. This is awesome!! It’s the right way!"

"This makes my heart happy, great job!" a commenter wrote. "As a preschool teacher, I couldn’t agree more with you."

Although Duett appreciates the praise, he told BuzzFeed News that his intentions were simple. "I just wanted parents who were influenced by the other video to consider the approach that I used," he said. "The initial videos are problematic because they create the illusion of effectiveness. But what’s going on behind the scenes of that is that a child of that age is laying the foundation for learning empathy and emotional association and they are observing behaviors and will mimic them."

Of course, Duett and others aren't trying to shame parents who believe in discipline-based tactics for their children. The apparent goal is to encourage parents out there to make informed decisions about how to best manage their child's behavior, which hopefully doesn't include beating up stuffed animals. As Duett demonstrated in his video, there are more peaceful ways to get kids to eat.