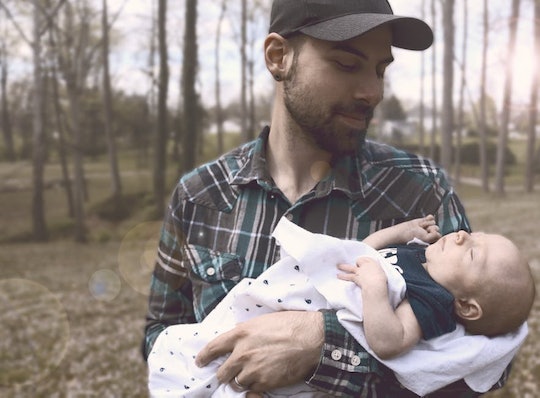 There are never enough hours in the day to get anything done and this is something that probably feels elevated for working parents. When you get home, all you want to do is crash and go to bed — but there are children to take care of, homework to help with, and meals to be made. Needless to say, between work and home life, many moms — in particular — are under immense pressure. But according to a new study, dads say they're just as stressed from work and home life as moms are — and here's why this perception is totally false.

Here's what the study said: According to the research conducted by the American Psychological Association, both men and women report similar levels of work-family conflicts with work and family interfering with both things regardless of the level of gender equality in the countries sampled. Work-family conflict is defined as the balance that forces a mom or dad to put work demands above family demands or vice versa.

Lead researcher of the study, Kristen Shockley, an assistant professor of psychology at the University of Georgia explained to Science Daily:

We essentially found very little evidence of differences between women and men as far as the level of work-family conflict they report. This is quite contrary to common public perception. The way this issue is presented in the media frames the way we think about it and it creates a perpetual cycle. Women hear that other women are struggling with this issue so they expect they will experience greater work-family conflict. There also is some socialization for it being more OK for women to talk about it than men.

It is great that this study addresses that working fathers admit that they experience stress when it comes to their work and family balance, and that people should aim to end the stigma surrounding that. However, it is a little ridiculous to claim that both working fathers and mothers experience the same level of stress surrounding balancing their work and home life. And here's why this is a little hard to believe.

For starters, while at work, women have to deal with so much more than just their work. They have to deal with the stress from the gender wage gap. In fact, a 2016 study from Columbia University confirmed that the gender wage gap strongly correlated to increased mood disorders among women who were paid less than equally qualified men. Women also experience stress in the workforce due to "stereotype threat" which, according to Harvard Business Review, is when a woman is aware of the stereotype that they perform poorly compared to men — and then perform poorly at work because of that.

This work related stress is on top of the fact that women are more stressed than men just in general. A different 2016 study found that women are nearly twice as stressed as men — with women being more likely to blame money as the source of their stress, according to the APA.

But it isn't just work and money that leads many to believe that women are more stressed from work and home life. According to a 2015 Pew Research Social report, women are twice as likely to say that being a working parent has made it harder for them to advance in their career. And according to Glamour, in the same Pew Social Report, men were more likely to overestimate the time they spend on chores and parenting.

While this new study can help us see that working dads also feel social pressure and stress, all of the factors that cause women stress — more than men — should not be forgotten. Especially since a lot of these stressors won't go away any time soon.