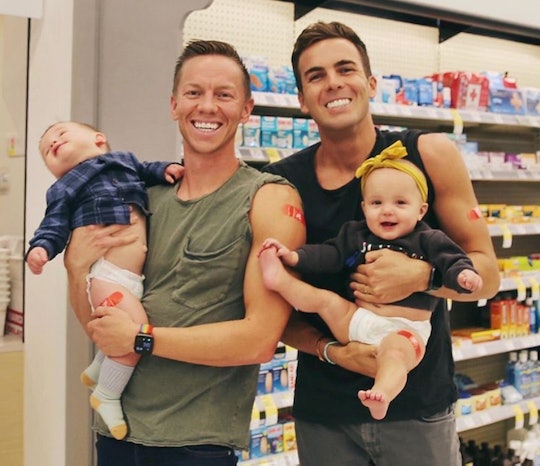 Earlier this fall, just as flu season was kicking off, a number of influential parents on Instagram were paid to promote Walgreens' flu shot. But the campaign didn't go down quite as planned — a number of parents who'd participated in Walgreens' campaign were harassed by those opposed to vaccines, BuzzFeed News reported earlier this week. Among those trolled by anti-vaxxers for promoting the flu shot were two dads whose response to the criticism has been perfect.

"Our life is hectic enough as it is," partners Bryce Abplanalp and Jeffrey Wright, who share adorable twins, wrote in a post published to their Instagram @Thisiswherewestarted in mid-October. "Risking getting the flu is not an option for us. Can you imagine trying to handle these two with the flu!?"

In a photo accompanying the post, Abplanalp and Wright pose with their twins inside a Walgreens. Every member of the family sports a red bandage, a symbol of their recent flu shot. "For our kids, we can’t imagine them getting the flu because we were 'too busy' to get them flu shots," the couple's caption continued. "This year, we’ve partnered with Walgreens to be a 'Flu Fighter' family because we don’t want to miss out on key moments in our life!" Abplanalp and Wright told BuzzFeed News that they'd been paid $200 to post the ad to their Instagram.

Almost immediately, Abplanalp and Wright's post were deluged with hateful comments from anti-vaxxers. And while the fathers tell Romper this isn't the first time they've received hateful messages on social media — "Being a same-sex family, we seem to attract people that hide behind their keyboard and spew hate," they say — things quickly got out of hand with commentators claiming they didn't deserve to be parents or accusing them of essentially killing their children.

"When the firestorm was too much, we just disabled comments on the Walgreens post," Abplanalp and Wright tell Romper. "Then, they just went to other posts and left their hateful messages." According to BuzzFeed News, a majority of the other parents involved in the Walgreens' campaign were ultimately forced to do the same when anti-vaxxers targeted their posts as well.

And while Abplanalp and Wright, and a number of other parents who participated in the flu shot campaign, were criticized by anti-vaxxers for being compensated for "giving medical advice," the couple tells Romper their participation wasn't about the money. "We really feel and know that vaccines save lives," the couple says. "Having two babies that spent time in the NICU, we realize that not everyone can receive the vaccine and they rely on others in order to boost their protection."

What's more, they wanted to show how easy it can be to get a flu shot. "It's so simple and easy to get the flu shot," Abplanalp and Wright tell Romper. "We just wanted to take an excuse away from people saying they didn’t have time."

Of course, not every comment and message received by Abplanalp and Wright has been one of hate. "We have received a lot of positive comments," the couple says, adding that there have been "people thanking us for vaccinating and people apologizing for the haters."

As for what they'd tell parents who are considering forgoing their child's vaccinations? Abplanalp and Wright have a simple message: "We believe in choice. We would hope that every parent that was able to vaccinate their child would," the fathers say, adding that they are not medical doctors but "rely heavily on their advice."

"We’d encourage people to get their facts from a medical professional and make the best decision for their family," the couple tells Romper. "We realize there are reasons people can’t and that's why it’s important for everyone that can, to get the vaccine."