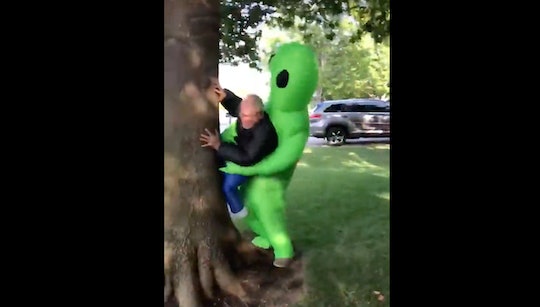 This Dad's Area 51 Costume Is So Hilarious & Spot-On, Please Send Him ALL The Treats

There are few times during the year that dad humor truly gets the spotlight it deserves more than Halloween. Between the dressing up, the trick-or-treating, and the abundance of puns available at their disposal, there's no greater time for fathers near and far to lightly embarrass their children with their antics. And one dad's Area 51 Halloween costume was certainly no exception. Thanks to his daughter sharing footage of it on social media, this pop's get-up has quickly gone viral for all the wrong (and honestly, right) reasons.

On Sept. 21, a Twitter user by the name of Anna Beffer posted a video of her dad in their front yard. In the video, he is wearing a costume that is a blow up "alien" holding a person captive. The costume functions as follows: your head is sticking out, so it seems as though you are the person the alien is holding. However, your arms and legs are controlling the rest of the alien costume, so you can essentially run around in circles and make it seem like you're being abducted. Well, her dad saw an opportunity, and did not miss taking it.

"Come here! Come here! Area 51, it's real! They let them loose!" the dad cries as he pretends to be stuck in the door, and then holding on to the tree in the front yard as the alien "abducts" him.

If you're interested in recreating the iconic moment, the "'Youandmes' Halloween Inflatable Alien Suit" is available both for children and adults at retailers such as Amazon.

For those who missed the cultural reference, Area 51 refers to a federally sanctioned part of Nevada that is closed to the public, and as the BBC has reported, allegedly used for testing aircraft. However, thanks to a conspiracy theory that Area 51 is actually where the government is harboring aliens and alien aircrafts — explaining further why there's a "no fly" ordinance over the area — plans for a hoax "raid" went viral on social media two months ago, with people claiming they were going to "storm" the compound, and find out what was going on once and for all.

The event did take place, according to Vox, but not quite as it was advertised. For those who did show up in Nevada, activities reportedly included wearing alien-themed t-shirts, alien costumes (perhaps this Halloween costume was there, too) playing beer pong, basketball, and throwing hatchets at wooden targets. In other words, it was more of a party than a raid, but sounds like a relatively OK time regardless.

Though the Area 51 "raid" may have turned out to be just one big alien-themed party, it seems every dad in the country is turning that into an opportunity to make more Dad Jokes about it, inflatable alien costumes included. If you're looking for a way to mildly humiliate your kids, this might be the route, though I do have many questions regarding the logistics of keeping the costume inflated, and mobility. Then again, maybe aliens never have to use the bathroom, and I'm totally overthinking it. Silly, human mistake.