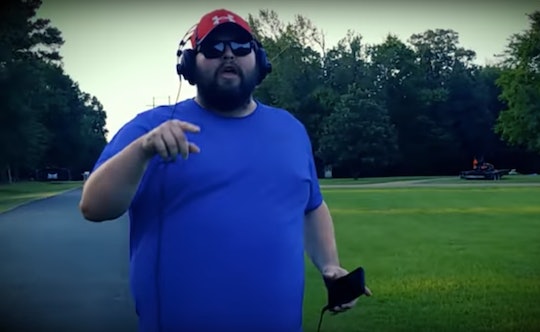 If you've lived the dad life, you know the dad life. It might be a lot less glamorous than it was prior to kids, but it's very well worth it, if only for the dad humor every father eventually shows off whenever and wherever. And if you were looking for a good laugh that's peak dad humor, please enjoy this dad's viral Billie Eilish parody, called "Dad Guy," Not only is it very catchy, it's also super accurate, all things considered.

Eilish's catchy song, "Bad Guy" is topping the music charts right now, displacing "Old Town Road" from its weeks-running glory, according to Billboard. Even if you don't think you're familiar with it, trust me, you've heard it at least once. A Reddit user named r/FunkTurkey heard the song, according to Upworthy, and felt inspired to pen an anthem to not the bad guys, but the "dad guys" of the world. You know the ones.

"White shirt, now red, that's taco sauce/Eating, just sitting on my phone/Plucking, grey hair out my nose," he begins, through a montage of typical dad scenes, including dinnertime, working a 9-5 job, changing the oil in the car, and mowing the lawn. "I'm a daddddd guy," he belts. "Whole box of Chex in just one bowl/I make a joke and your eyes roll/Respect my rules you're in my home/Now go and clean your room," he continues.

The video, which currently has over 1 million views on YouTube, has quickly become a sensation.

"Okay, but how did you get the lyrics so PERFECT? Honestly one of the best-written parodies I've ever heard," one comment read. "Damn I thought I was the only dad going through this! Nice job dude, thanks for good laugh!!" said another. "Hilarious, I bet this is exactly how my dad feels with three kids, I'm not gonna send it to him cuz I don't wanna make him feel bad but I am 100% sending this to my Group chat," one more chimed in.

Last week, Funk Turkey returned to YouTube to thank everyone for the "overwhelming" amount of support that he's received for the video. "Wow, almost half a million views and 2,000 something comments on Reddit, and YouTube, and Facebook and Twitter..." he wrote, which has since doubled and then some. "So thank you, first off, for that. It's been super positive, and fun, and I'm not really sure what to say other than I'm going to keep making more stuff that is going to be equally stupid," he joked, before his wife knocked at the door.

"Are you on the phone?" she asked. "In the bathroom?" The bit outed him for apparently filming his update video on the toilet, which proves that he's pretty sincere about continuing to create very funny content.

Ultimately, humor is not only one of the best ways to get through the day, it's also a great way to get through parenthood, which can be frustrating, challenging, and sometimes downright exhausting. Thankfully there are creators like Funk Turkey who are promising to highlight more and more of our experience through super funny material.