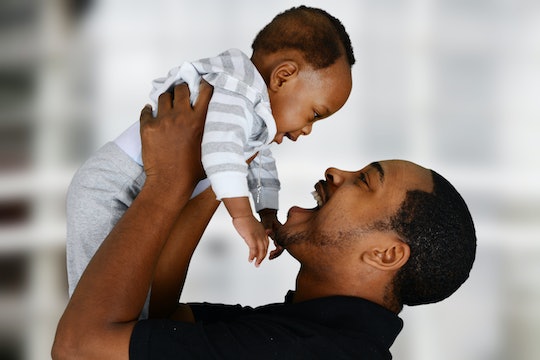 While conversations around paternal leave often focus on new moms, a recent study from Indeed.com showed that dads want more paternal leave than they're getting. According to Yahoo! Finance, more and more fathers are seeing the benefits of paternity leave and are eager for companies to start seeing them, too.

It's no secret that when it comes to paid paternal leave, the United States ranks last when compared to other developed countries. In fact, while the OECD reports that mothers in its member countries are, on average, given access to 18 weeks of paid maternity leave, the United States offers absolutely no federally-mandated paid maternity leave. As a result, just 17 percent of civilian workers have access to paid paternal, or family, leave, a Bureau of Labor Statistics National Compensation Survey conducted in March 2018 reported.

Given the lack of paid paternal leave in the country, it's not altogether surprising then that a number of new or expectant dads are worried about paternal leave. In fact, Roughly 44 percent of expectant fathers reported having concerns about the amount of paternity leave, paid or unpaid, their company would offer them, Yahoo! Finance reported a recent Indeed.com survey found. What's more, while dads were reported to be allowed, on average, seven weeks of paternal leave, Indeed.com found that 10 weeks was the average amount of time those dads felt they really needed to take.

Surveyed dads also expressed a desire for employers to offer more flexibility in regards to what hours they work following the birth or adoption of a child. According to Yahoo! Finance, 80 percent of first-time dads reported feeling that they'd benefit from being able to adjust what time they started their workday, especially when late-night feedings or other issues make sleeping through the night impossible.

Of course, this isn't the fist time a study has found that dads want more time to spend with their new or newly-expanded family. For example, a study released earlier this month by Promundo and Dove, found that 85 percent of dads spread across seven different countries said they'd do anything to be "very involved" in the early weeks and months of newborn or adopted child care.

In fact, research shows that giving dads paternal leave can ultimately benefit both their partner's and child's health. According to Palo Alto Online, researchers at Stanford University studied the effects of Sweden's decision to modify its previous parental leave policy restrictions and give fathers access to up to 30 days of paid parental leave within the child's first year at home. They found that paid parental leave for fathers resulted in clear benefits for their partners' health, such as reduced breastfeeding or childbirth-related complications like mastitis or postpartum depression or anxiety.

"Our study underscores that the father's presence in the household shortly after childbirth can have important consequences for the new mother's physical and mental health," the Stanford Institute for Economic Policy Research reported assistant professor of economics Petra Persson said.

What's more, a study published earlier this year in The Journal of Marriage and Family also found that paternal leave for fathers can positively impact how satisfied parents feel with their relationship following the addition of a new child.

While the United States lags behind many other developed nations when it comes to paid paternal leave, there are some legislators hoping to address the problem. For instance, the Family and Medical Insurance Leave (FAMILY) Act proposed by 2020 presidential hopeful Sen. Kirsten Gillibrand would provide up to 12 weeks of partially paid leave if passed, two weeks more than dads surveyed by Indeed.com desired. And that extra time could have huge, life-long benefits for the whole family, making it important to broaden conversations around paternal leave to include both parents.