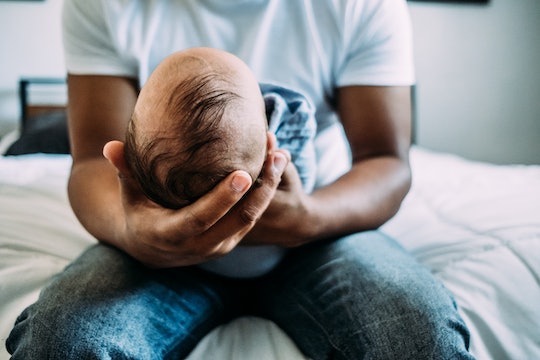 Over the years, research has shown that when dads are more hands-on with their babies it can help lower depressive symptoms in mothers and raise their overall life satisfaction. But now, a new study published in Frontiers in Psychiatry has found that dads who are more involved with their newborns are less depressed themselves.

"We found that fathers who were more involved with their infants shortly after their birth were less likely to be depressed a year later," Dr Olajide N. Bamishigbin Jr., an assistant professor of psychology at California State University, Long Beach, and lead author of the study, said in a statement. "This is very important because, it suggests that, if fathers are involved with their infants early and often, their mental health, and the health of the entire family unit, may fare better."

Researchers interviewed 881 low-income and ethnically and racially diverse fathers spread across five different U.S. cities one month after the birth of their child and then continued to evaluate their depressive symptoms at regular intervals until the child's first birthday. According to researchers, a significant portion of participants did not live with and were not married to the baby's mother.

For the study, researchers specifically looked at three parenting indicators: the time fathers spent with their newborn; parenting self-efficacy or the father's belief or confidence in their capacity to be a parent and care for the child; and finally, the father's ability to provide material support to the child.

While researchers behind the study didn't seek to uncover exactly why greater paternal involvement might lower depression in fathers, they have some theories. "In our paper, we suggest a few reasons that greater father involvement in parenting would lead to less depression in fathers," Bamishigbin said. "For example, fathers who are more involved during infancy may feel more competent as parents and be more satisfied in their role as parents over time, and this could contribute to lower depressive symptoms."

Whatever the reason, researchers have concluded that paternal involvement may be an important predictor of a father's mental health during their transition into fatherhood. But without a national paid family leave policy — many employers in the U.S. don't offer their workers paid leave, according to the Kaiser Family Foundation — researchers have said fathers, especially those who are low-income, may struggle to be more involved and hands on with their newborns.

"This is why we suggest that paid paternal leave policies which can allow fathers the opportunity to be more involved with their kids and gain confidence as a parent early on in their lives, without having to worry about their economic security, and may help allow fathers more opportunities to be involved with their kids and be part of shaping healthier and thriving future generations," Bamishigbin said. "In turn, this may improve the well-being of the entire family."

More Like This
John Mulaney Teaches His Son To Say "Ahh" After Drinking Water In A Super Cute Video
Nick Cannon Announced The Birth Of His 9th Child, A Daughter Named Onyx
Baby-Led Weaning: A Comprehensive Guide To Introducing Solids
Kanye West Apologizes To Kim Kardashian For The Stress He Caused The Mother Of His Children