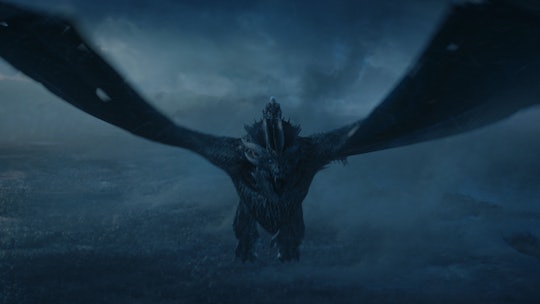 Daenerys Targaryen probably wishes she never traveled to Westeros on Game of Thrones, because she's had bad luck ever since she came ashore. Two of her dragons lost their lives, so now only Drogon remains. Fans have come up with a way to replenish the number of dragons before the finale, but it's a theory that's thin on evidence. They think one of the dragons reproduced. But Daenerys' dragons did not have babies on Game of Thrones — there's just no way for it to fit into the story, or be of any help to anyone currently.

As explained by Reddit user Justzxcvbnm, the theory is as follows: Drogon disappeared for a period of time in Season 5 and went on an all-the-sheep-you-can-eat tour of the surrounding farms. Allegedly, he was so hungry because he was preparing to lay eggs, which he did before Dany found him again. The assumption that Drogon is male might be mistaken; they could have been female this entire time. It's also possible that dragons don't have a defined gender in the world of Game of Thrones, or they can change theirs at will. As mystical creatures, their reproductive process is basically all made up. Dragons might even be able to lay eggs without a partner like Komodo dragons. Dragons don't exist, so it's all on the table.

The loss of Dany's dragons hit the audience almost as hard as it hit her, so it would be really reassuring to know that there were some baby dragons waiting to hatch and carry on the legacy. But since when has Game of Thrones ever been reassuring? The theory is plausible enough in the way all fictional theories in magical worlds make a little bit of sense; I don't expect Jon Snow to suddenly sprout wings and fly, but I also don't know enough about magic to dispute it, you know? But just because something can happen doesn't mean it will.

There are just too many things that would have to fall perfectly into place for a bunch of Deux ex machina dragons to arrive at the last minute. Even if Drogon did lay eggs, there's no way to know if they hatched. Dany's eggs lay dormant for who knows how long before she managed to crack them open. If someone found the eggs, knew what they meant, created the perfect conditions, and brought them to life, then the news would probably have gotten around, even in Westeros. Dany's dragons were a big part of what made her famous, so if anyone else had access to dragons, people would have heard about it.

But let's say they did hatch and there are some new baby dragons wandering around the world. What then? Dany's trio were so attached to her because she raised them as their mother, but these stranger dragons have no reason to care about her bid for the Iron Throne. Would they even know to fly to Westeros, a place where they're not native, that doesn't suit their temperament? Probably not. Drogon didn't raise them, so they have no attachments there, either. They definitely wouldn't be able to spew flames on command since no one ever taught them how to.

It would be nice to have something positive to look forward to on Game of Thrones, like the propagation of a seemingly long lost species. But this theory just seems like wishful thinking.