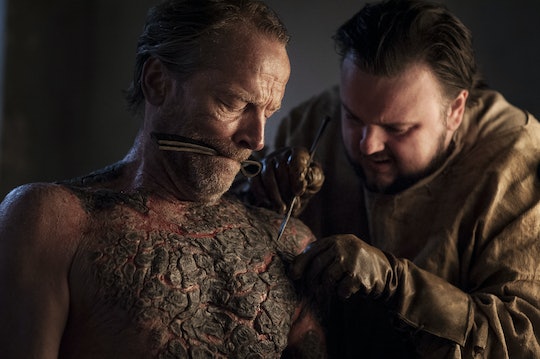 It took him a few episodes to get back to her, but now that Daenerys and Jorah have reunited on Game of Thrones, he might be the one person who can sort of rein her in. Not that she should be controlled, but the number of charred bodies is piling up, so if anyone can convince her to tone it down a bit, it's Jorah.

The immediate task he volunteered for was to go beyond The Wall and bring back a White Walker to prove to Cersei that there is a bigger threat at hand than who is on the Iron Throne. As Jon pointed out, Jon is much more qualified for the task, but it looks like Jorah is going anyway. If he returns to Dragonstone to help Daenerys, he might act as another Hand of the Queen since right now, she could possibly use the extra guidance.

Long before giving the remaining Lannister and Tarly soldiers the option to bend the knee or die, Daenerys rescued the Unsullied and inspired the Dothraki, so the way she got her latest army was through a different kind of tactic. Since some might be quick to refer to her as the Mad Queen now, having Jorah back at her side might be just what she needs to help her think a little more clearly about her strategy moving forward. (Lord knows Tyrion and even Jon Snow have tried, to no avail.)

When Daenerys and Jorah reunited on Game of Thrones, it was like another version of one of the Stark reunions this season. Since Jorah has been with Daenerys since the beginning, he's been like family to her and really, he might know her better than anyone. Who better to guide her toward the best possible decisions?

Unfortunately, Jorah is about to be north of The Wall and fighting alongside the likes of Jon, The Hound, and Tormund, so his reunion with Daenerys was definitely cut short. But Jorah returned to Game of Thrones to help Daenerys in whatever way he can, and that's the important thing.

Even if Jorah came back to Daenerys only to leave her again (instead of helping Tyrion to convince her to take a step back with all of that dragon fire), his return was likely not for nothing. He insisted on serving Daenerys on the mission of taking a White Walker from beyond The Wall to prove to Cersei that they exist and are a real threat, so even if that task ends up killing him in the end, he will still have served his queen as promised.