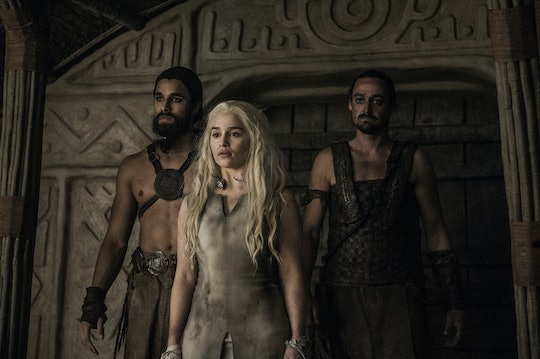 In a moment sure to be giffed again and again over the next few months, Daenerys Targaryen burned the khals on Game of Thrones – like, all of them – and emerged victorious from the flames without a mark on her. As she stands naked before the fire, every member of the Dothraki bows to her. It's a serious power moment. It calls to mind another of Dany's most badass moments from the finale of the show's very first season, where she burned Khal Drogo's body and awoke her dragons. That moment made it clear Dany was going to be a real force to be reckoned with. This took it to another level.

Dany was brought in front of all of the khals of the various clans so they could decide what to do with her. After Khal Drogo's death, she was supposed to go back to Vaes Dothrak and live out her life in the Dosh Khaleen, where all the widowed khaleesis live. Dany, however, had other plans. When she said as much to the assembled khals, she was treated to a repulsive diatribe of all the violence they planned to inflict on her but throughout the whole thing Dany just smirked. She had a plan.

Dany wrapped her hands around a burning brazier – already a pretty impressive move that brought apprehension to the face of the khals – before throwing it to the ground. The fire spread rapidly throughout the large hut and the khals raced to the doors, but they found themselves locked within. They entire time Dany stood ever so nonchalantly in the middle of the roaring flames, that same smirk on her face. This is not a woman you mess with if you expect to live.

Dany's ability to withstand fire has been curious from the beginning. She has emerged from more than one bonfire intact, but author George R. R. Martin insisted that Dany had no special fire resistant powers. The proof is in the pudding, though – Dany has submerged herself in near boiling baths, touched burning hot dragon eggs, and now come out of two fires without a scratch on her.

The moment in tonight's "Book of the Stranger" echoes the end of the Season 1 finale down to Dany's clothes burning off as steps out to observes her new subjects. Before she burned the khals, Dany told the them that they were unworthy to rule the Dothraki and that she would do so instead. They scoffed at her, but it's obvious that Dany was speaking the truth. Dany is now seemingly in control of a massive army that might allow her to take a big step forward in her fight for the throne.

It seems fire does not, in fact, burn a dragon