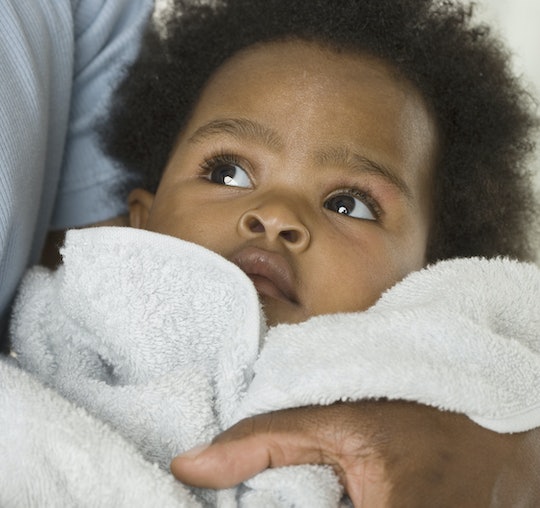 See u next week, Mom. Fotolia

Can We All Just Admit That None Of Us Are Doing Daily Baths?

When our son was born, I wanted to know how often I needed to clean him. The question felt silly at the time, but before long I found out it wasn’t that bad of an inquiry. Relatives advocated for frequent cleaning, especially since we have dogs at the house. They were concerned about allergies and his delicate newborn skin. Like most new moms, I was tired and knew that was not an option. I didn’t even have the energy to bathe myself four or five times a week. The dry Midwest weather decided for me — daily baths for my baby are a damn mirage.

I didn't know much about how his skin would react to the climate or what moisturizers would work best for him. It wasn’t a risk I was willing to take. So instead, I decided on once-a-week baths and daily neck/ thigh roll wipe downs. Diaper blowouts would be handled on a case-by-case basis.

When my chub grew from a newborn to an infant, bath time didn't seem any more practical for us. My husband worked long hours, so we took baths together. As one could imagine, trying to control a big wobbly head and clean myself wasn’t an easy feat. We increased the average amount of baths to two a week, but I’d be lying if I said we didn’t miss any. I felt like the world was on my shoulders and felt like a failure often.

I started to notice his skin did worse after a bath and had dry, moisture-resistant qualities like my own. The pediatrician didn’t refer me to a dermatologist as requested, but gave me a ton of steroid-based creams that didn’t work. Since things hadn’t improved by our second visit, I was encouraged to bathe him as little as possible. Apparently, when you have dry skin, frequent baths can make things worse. It was nice to hear someone in the medical community was on my side, but it didn't make me feel any less ostracized.

'Do you give your child a bath every night,' I asked one of my friends when we were close enough. She laughed in my face.

The first year of motherhood was pretty lonely for me. I was adjusting to living in a new town and struggling to balance the ups and downs of first-time parenthood. Although I had these ideas in my head for how bath time went, I didn't have any parents to discuss it with.

In my mind, the parenting world was filled with parents who schedule nightly baths, followed by mandatory storybook reading, and cuddly kisses before cozy tuck-ins. I felt like I was committing some cardinal sin of parenthood and I felt guilty that my son wasn't bathing daily.

Eventually, I got out and started meeting other moms. “Do you give your child a bath every night,” I asked one of my friends when we were close enough. She laughed in my face, and her response was extremely comforting.

“With two kids this close in age, do you really think it's possible to bathe them every day?” she started. “They're lucky if they get a bath twice a week. No one washes their children every day!”

I asked more moms and got variations of the same answer. After the daily ups and downs of chasing children around the house, trying to get them to eat food, and hoping to have at least 30 seconds of personal breathing time it wasn't practical for most people to bathe one child, let alone multiples, daily. I wasn’t a bad mom — I was a busy mom. But more importantly, fewer baths didn’t mean I was failing him.

Two and a half years and a new pregnancy later, I understand what those more experienced moms were telling me. Bath time is necessary but not necessarily an interval-based activity.

Chasing a toddler around the house while trying to breathe with a fetus crushing my organs eliminates any unrealistic desires to bath him daily. As his mom, I get to decide how often my son takes a bath. I made this decision based on his skin health, his playfulness, and my mental health.

He’s not filthy, neglected, or dying.

Who cares if my son goes three or four days in between baths. We've learned what works for us and we're sticking to it. Besides, dirty feet never killed anyone.