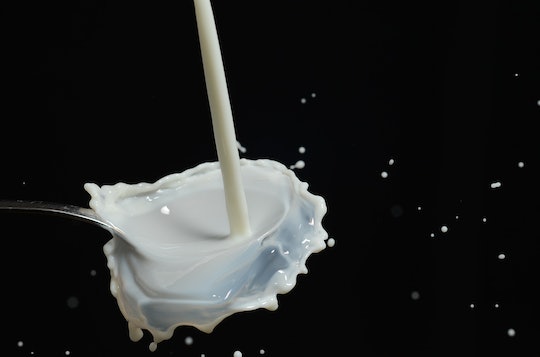 You know the phrase, "Milk does a body good"? Well, it seems there may be something to that saying. A new study released this week has shown that dairy milk may affects a child's height. Kids who drink cow's milk are slightly taller than their friends who drink milk substitutes.

A study published Wednesday in the American Journal of Clinical Nutrition found that children who drank cow's milk gained, on average, about a sixth of an inch (or 0.4 centimeters) in height for every cup consumed. In other words, if a 3-year-old kid drank three cups of a milk alternative such as almond milk or soy milk, they would be over half an inch shorter than their cow milk-drinking peer, the findings show.

This isn't the first study to look at the correlation between height and consumption of cow's milk. Research published in 2004 in the American Journal of Clinical Nutrition found that kids who drank a high amount of dairy milk were taller by nearly an inch (or 2.5 centimeters).

Both studies suggest that cow's milk have components that stimulate growth that are missing in plant-based milks, Dairy milk contains calcium, which has been linked to improved bone health. Cow's milk also stimulates insulin-like growth factor better than plant-based substitutes like almond or rice milk, according to CNN. The study suggests the difference in height could be attributed to the disparity in IGF production.

Of course, these new findings do not mean children who drink cow's milk are healthier than their peers who consume milk substitutes. According to Harvard School of Public Health, cow's milk is high in saturated fat, can cause stomach and intestinal issues, and has been linked to possible increased risks in prostate and ovarian cancers. Plus, plant-based milks contain many of the vital nutrients found in cow's milk like calcium, potassium, magnesium, and protein.

My family and I drink cow's milk (fat free, thank you), so I am glad to know that there's an added benefit for my kid. But for all its benefits, cow's milk does have its cons, so these findings shouldn't sway parents to abandon or change their dietary habits. As the study suggests, more research is needed to better understand this connection between height and consumption of milk alternatives.