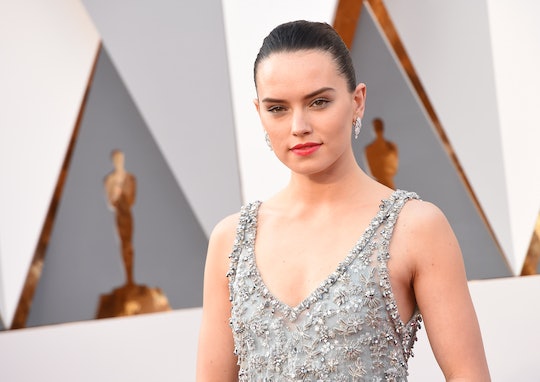 What can be said about Daisy Ridley that hasn't already been said? She's bright, cheerful, and well on her way to some pretty big things. And not that it's hugely important, but Ridley seems to handle it all in style, too, which is why it was to no one's surprise that at Sunday night's Academy Awards red carpet, Ridley's Oscars dress was perfectly appropriate once more — especially impressive, considering that it was the young actress' first time attending the award show as an official invitee and presenter.

Not that that should be a shock: Despite her relatively new status as a Hollywood A-lister, Ridley has had her fair share of fashion hits in recent days. Sunday night, it seemed, was no exception.

Marching down the red carpet in a bejeweled, sheer, light blue-gray, Chanel Haute Couture gown, Ridley was the epitome of young and fresh-faced, opting for a simple hair and muted makeup with a matte red lip, reminiscent of her Star Wars character, Rey, rather than going overboard. The Force Awakens star chose to top off her sparkling look with massive diamond baubles, Christian Louboutin peep-toe, ankle strap pumps, and, of course, her trademark dimpled smile.

"I looked at a few dresses, I picked my favorite and that's the one I'm wearing," Ridley told E! News at the US-Ireland Alliance's Oscar Wilde Awards on Friday last week. "It's a gorgeous dress and gorgeous jewelry and I'll have people making me up, making me look better."

Sunday wasn't the first time Ridley made a name for herself among fashion junkies: At the Star Wars: The Force Awakens London Premiere last December, the 23-year-old dazzled in a jeweled, cut-out Roland Mouret gown and a sleeked back top-knot (of which Rey would also have totally approved).

Although Ridley claimed to be nervous about presenting an award in front of millions of people on Sunday ("I could trip or say something wrong or trip as I'm walking up to the stage," she told E!), it seems she can cross "fashion misstep" off her list of worst case scenarios.