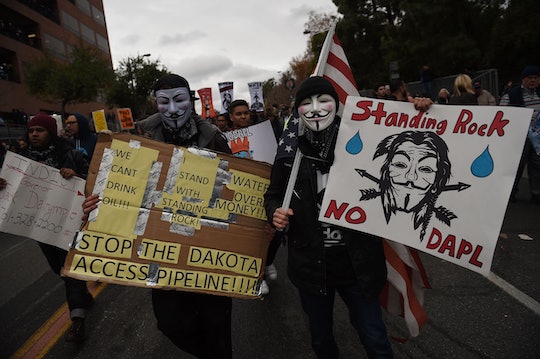 DAPL Construction Is Reportedly Back On

According to The New York Times, Trump signed a document on Tuesday morning that would give government approval to both the Dakota Access and Keystone XL pipelines, two projects that were rejected by the Obama administration. As part of his approval of the projects, Trump said American steel would have to be used for the pipelines' creation, telling reporters:

"We are going to renegotiate some of the terms," Trump said on Tuesday, according to Reuters. "And if they like we will see if we can get that pipeline built — a lot of jobs, 28,000 jobs, great construction jobs."

Trump also said that the Dakota pipeline would be "subject to terms and conditions negotiated by us," and that his executive order would "put a lot of steelworkers back to work."

Despite Obama's actions towards halting the Dakota Access pipeline's construction, protestors stayed on at Standing Rock, wary of any changes that might push construction through. Just this Monday, the Standing Rock Sioux Tribe asked protestors to leave, writing in a Facebook post,

The Standing Rock Sioux Tribe is grateful to all who have stood with us during our efforts to secure a thorough review of the Dakota Access Pipeline. Because we worked together, the Federal Government will prepare an Environmental Impact Statement. Moving forward, our ultimate objective is best served by our elected officials, navigating strategically through the administrative and legal processes. ... We ask the protectors to vacate the camps and head home with our most heartfelt thanks.

The Standing Rock Sioux Tribe has yet to respond to Trump's new executive order.

Some have wondered whether Trump's commitment to building with American steel will dissuade TransCanada from moving forward with the Keystone XL project. According to The Calgary Herald, however, a TransCanada spokesperson previously said that the company remained "committed to Keystone XL."

According to NBC, Trump's executive order will also help expedite environmental reviews and fast track approval of manufacturing projects. During his press conference about the order, Trump reportedly ignored a question on whether he had any comments for the Standing Rock Sioux Tribe, who could be affected by the Dakota Access pipeline and who have led protests against it for months now.

Most of the major companies and dissenters involved in the pipelines' construction have yet to speak up about Trump's order, but one thing is for sure: the news is certain to spark plenty of controversy in the coming days and weeks.