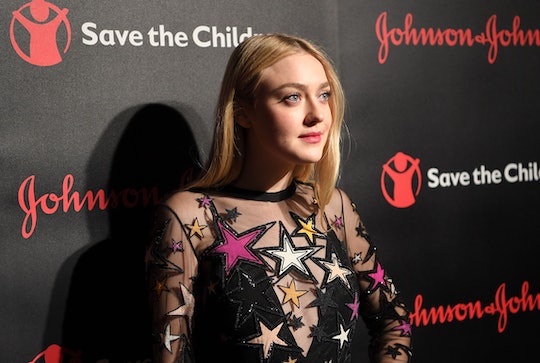 Dakota Fanning To Star In TNT's 'The Alienist'

Dakota Fanning started her career on small screen, snagging her first television role at the ripe old age of six, but she quickly made the jump to feature films and never looked back. She has starred in movie after movie, some more successful than others, in a variety of genres and made a name for herself as a young actress. Her days on TV were so long ago that most people might not even remember her appearances on E.R. and Ally McBeal. While she's still got an active career in film, this year she will be making her return to television. Dakota Fanning will star in TNT's The Alienist, which explores a fictional mystery from years gone by.

Many actresses make the transition from film to TV when they get a chance to snag more interesting, complicated roles and it seems like Fanning might be doing the same. In The Alienist, Fanning will play the part of Sara Howard, a police secretary during the Gilded Age who dreams of becoming a detective herself. She utilizes her burgeoning detective skills to investigate a rash of murders of young male sex workers alongside an alienist (an archaic term for psychologist) played by Danel Brühl and a reporter played by Luke Evans.

The show will be adapted by the bestselling book of the same name written by Caleb Carr. Though the murders at the heart of the story's mystery are fictional, there are nods to the real world within The Alienist as well. For example, Fanning's Sara works for newly appointed police commissioner Theodore Roosevelt, a position he did really hold in the 1890s. Carr, a historian, wanted to be true to the period and ground the story in history even if the murders didn't actually happen.

Though the novel primarily follows the characters played by Brühl and Evans, the inclusion of Fanning may lead to Sara taking on greater prominence in the story. Sara aspires to be the first female police detective in New York, a landmark that was accomplished around the same time in reality, and uses her intelligence and fascination with solving crime to make it happen. Though Sara's official description from TNT contains such eye-rolling phrases as "primly dressed but beautiful" and describes Sara as someone who "shakes hands like a man," the character is nevertheless sounds like an interesting one.

The Alienist will begin production early this year and premiere sometime later in 2017, though its exact release date has not yet been announced.