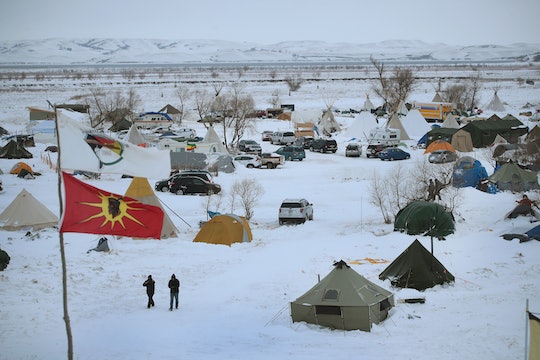 On Sunday, the Army Corps of Engineers reportedly told Standing Rock protestors that the Dakota Access Pipeline's construction had been halted, according to several media reports. The pipeline's current route under Lake Oahe will reportedly be denied, suggesting that the months of protests that took place against the pipeline were effective.

The U.S. Army announced Sunday that it would not approve an easement that allowed the pipeline to run under Lake Oahe. The announcement came nearly a month after the office of the Assistant Secretary for Civil Works announced a temporary delay in the easement decision in November, in order to discuss the pipeline with the Standing Rock Sioux Tribe. On Sunday, Assistant Secretary for Civil Works Jo-Ellen Darcy said alternate routes needed to be explored.

"Although we have had continuing discussion and exchanges of new information with the Standing Rock Sioux and Dakota Access, it's clear that there's more work to do," she said in a statement on Sunday. "The best way to complete that work responsibly and expeditiously is to explore alternate routes for the pipeline crossing."

Darcy said alternative routes would be considered after an Environmental Impact Statement was carried out with a full analysis and input from the public.

We wholeheartedly support the decision of the administration and commend with the utmost gratitude the courage it took on the part of President Obama, the Army Corps, the Department of Justice and the Department of the Interior to take steps to correct the course of history and to do the right thing.

He said the tribe would be "forever grateful" to the Obama administration for the historic decision. "We want to thank everyone who played a role in advocating for this cause. We thank the tribal youth who initiated this movement. We thank the millions of people around the globe who expressed support for our cause," he said. "We look forward to being able to return home and spend the winter with our families and loved ones."

Despite maintaining an attitude of gratitude and peace, Archambault acknowledged that President-elect Donald Trump's inauguration in January could bring about a change in governmental attitude regarding the pipeline route. "We hope that Kelcey Warren, Governor Dalrymple, and the incoming Trump administration respect this decision and understand the complex process that led us to this point," he said. "Treaties are paramount law and must be respected, and we welcome dialogue on how to continue to honor that moving forward."

After months of protests — often under incredibly challenging circumstances — the news was celebrated. According to media reports, the announcement was greeted with loud cheers at the Oceti camp, while online, supporters chimed in to celebrate.

This doesn't mean that the pipeline construction won't be completed, of course — but it's a powerful reminder that the public's voice matters, and it's an incredibly important victory for the Standing Rock Sioux and other tribes who came together to protest the pipeline.