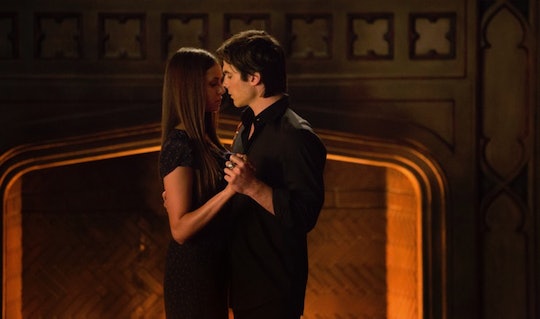 It's a moment that's been months and months in the making, and now (finally) after so much anticipation, Damon and Elena reunited on The Vampire Diaries series finale and it was everything fans were hoping for and more. As soon as news broke that Nina Dobrev was headed back to Mystic Falls for one final hurrah, an epic Delena moment wasn't just predicted — it was downright expected. (Seriously, if this hadn't happened, can you imagine the riot that would've ensued?) But Julie Plec and the writers have never let us down before, and this instance was no different.

Sure, it came on the heels of losing Stefan, which was pretty devastating to say the least. But it was also a great way to bring Elena back into the picture, allowing viewers to see that Damon wasn't going to have to go through the heartache of losing his brother alone. He'd have Elena by his side to help him through it. Thanks to Bonnie's badass witch powers, she was able to find a way to break the curse, meaning she didn't have to die in order for Elena to wake up. (I know, finally an instance where Bonnie didn't have to sacrifice herself for the group.) And once Bonnie filled her in on everything, Elena went right to Damon's side in a heart-warming embrace.

And the Delena moments didn't stop there. We may not have had the chance to see them interact much outside of this moment, given the limited amount of time there was left in the episode, but we did find out what became of them throughout the years. They went on to get married (yep, that was definitely a ring on Elena's finger) and live a wonderful and happy life together.

These two have been through so much throughout the years, it was nice to get an actual confirmation that things worked out the way they should. Whether you have always been a Delena 'shipper or not, there's no deny the insane chemistry these two have shared throughout the years, so knowing that they finally got a happily ever after was a nice way to round out the series. Sure, they lost a lot in order to get to this place (RIP Stefan forever and ever), but it's reassuring to know it wasn't all for nothing. They have each other — until death do they part.