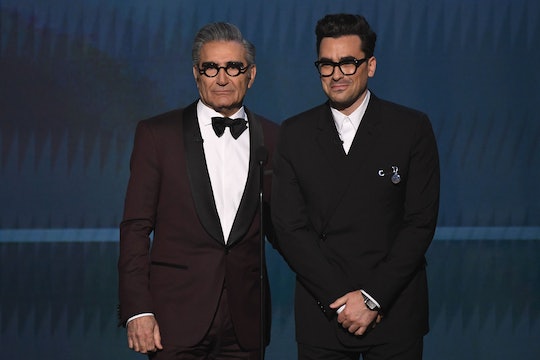 This year has been a doozy. But Dan Levy's reaction to his dad Eugene's Emmy win for his role on Schitt's Creek was almost wholesome enough to save the whole thing. When Eugene was named Outstanding Lead Actor in a Comedy Series — his first Emmy win in almost 40 years — his son was visibly overcome with pride.

Throughout the Emmys, Dan was the ultimate hype man to everyone around him. The Schitt's Creek cast gathered for an Emmys viewing party in Toronto, celebrating their many, many wins like the tightly-knit family they are. The Canadian comedy received 15 total nominations for its sixth and final season, including all four of the comedy acting categories, and the wins just kept on coming.

While Dan was characteristically excited for every win his cast received, watching his real-life dad receive an Emmy for his fatherly on-screen performance was even more special. As Eugene stood to accept his award, Dan could be seen in the background tearing up over the win. "Ironical that the straightest role I've ever played lands me an Emmy for comedy performance," Eugene said of his win, and Dan smiled on in pride. The pair went on to win quite a few Emmys for the show and Dan's pride for his father never faded.

Along with lead actor, Eugene — and his son Dan — won Best Comedy Series for Schitts Creek and the pair accepted the award together. The show is the brainchild of the talented father-son duo, and their message of inclusivity through comedy has touched hearts across the country.

Throughout his career, Eugene has been nominated for 13 Emmys and won four. His last win was in 1983 for Outstanding Writing in a Variety or Music Program. And while he was nominated last year for his performance as Johnny Rose on Schitts Creek, 2020 marks his first win in nearly 40 years. His son was understandably proud and overcome with emotion as his dad accepted the award and the pair kept on celebrating as the Emmys went on.