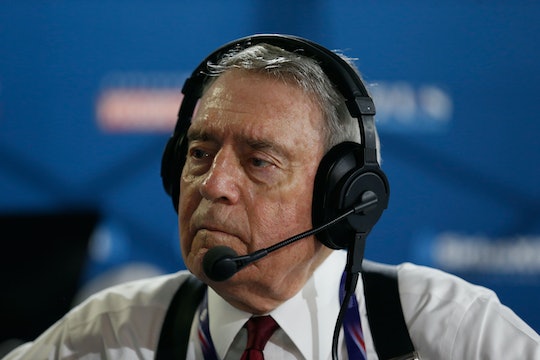 This election season seems to have everyone talking politics and in what direction they want the country to go. It's turned almost everyone on your Facebook timelines into policy experts, activists, or angry, angry trolls — which is why it's nice to sometimes have one person just lay it all out there. One beloved, retired CBS News anchor is among those telling it like it is. On Tuesday, Dan Rather's post-election message, posted to his Facebook timeline, reminded people that this was a big, watershed moment in American history.

"History will demand to know which side were you on. This is not a question of politics or party or even policy," he wrote. Instead, Rather said that this moment in history is a question about the "very fundamentals of our beautiful experiment in a pluralistic democracy ruled by law." Rather specifically called out President-elect Donald Trump for not rebuking white supremacists, especially since a video of neo-Nazis "heiling" Trump in a federal building made its way around the internet this week.

Rather noted in his Facebook post that, in the past, it was normal for one side to gloat after an election and for another to wring its hands. "But these are not normal times. This is not about tax policy, health care, or education — even though all those and more are so important. This is about racism, bigotry, intimidation and the specter of corruption," Rather wrote.

His message to his followers was basically that it's OK and almost necessary to be scared right now, but to not let fear get in the way of enacting change. "To all those in Congress of both political parties, to all those in the press, to religious and civic leaders around the country, your voices must be heard," the retired journalist wrote. And he was even generous towards the president-elect, writing that he hoped Trump would speak out, and forcibly, against the bigots and acknowledge the "dangers that are brewing" and that if he did, it would be worth listening to the Commander in Chief.

But like many Americans, Rather is realistic. "I am deeply worried [about] his selections of advisors and cabinet posts," he wrote.

Rather's message is worth reading, especially if you feel anxious about the future. He proposes solutions — support good journalism, get active in your communities, talk to other people. If you're just anxious about talking to your family over the holidays about this election, Rather provides a script of sorts that Democrats and third party voters can use to explain that it's not about losing the election, it's about losing some core American values. Until, of course, maybe, Trump does something that suggests he wants to unify the country.

He concluded his message by urging Americans to "stay vigilant." And as the Trump transition rolls forward, that's really the most anyone can do.