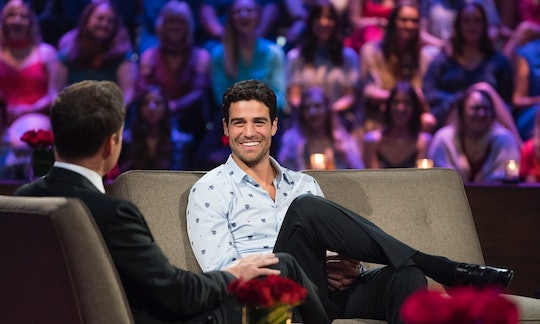 Believe it or not, we're about to embark on Season 27 of ABC's Dancing With The Stars. The new season will premiere on Monday, Sept. 24, at 8pm ET with a brand new cast of stars for you to cheer on. In fact, the list of stars were announced on Good Morning America on Wednesday, Sept. 12, so we can share the Dancing With The Stars' Season 27 cast lineup. So, who's ready to put on their dancing shoes and get this show started?

The Season 27 cast of DWTS is full of familiar faces. Some of the faces include a Bachelor Nation favorite, a Disney Channel star, and an 80s sitcom star. But first, which professional dancers will be returning for Season 27? DWTS has enlisted many of their top dancers yet again, including Val Chmerkovskiy, Sasha Farber, Witney Carson, Emma Slater, Sharna Burgess, Artem Chigvintsev, Keo Motsepe, Jenna Johnson, and Gleb Savchenko, as confirmed by ABC. Plus, Cheryl Burke Lindsay Arnold, and Alan Bersten, as well as newcomer Brandon Armstrong, as ABC News reported. These pros will all be taking the dance floor with their celeb partners when DWTS' Season 27 premieres, but which one of them will take home the mirrorball trophy? Unfortunately, it's going to be a while before we find out!

And now, onto the news you've been waiting for: the "stars" of Dancing With The Stars Season 27!

Joe Amabile, aka "Grocery Store Joe" from The Bachelorette and Bachelor In Paradise.

Tinashe, the pop star who blew audiences' minds with her Janet Jackson tribute at the BET Awards in 2015.

John Schneider, best known for his iconic role the original Dukes of Hazzard.

Nancy McKeon, otherwise known as Jo Polniaczek from The Facts of Life.

It's a little early to be making predictions, but I have to admit I can already spot a couple of front-runners. Athletes, and particularly gymnasts, tend to perform particularly well on this show, considering the fact that ballroom dancing requires many of the same athletic skills as gymnastics. So I feel like Retton is definitely going to be one to watch. Another dancer to keep your eye on? Tinashe. The pop superstar has already proven her hip hop dancing chops, so we'll just have to see how well that translates onto the ballroom. My guess? She's gonna kill it.

That being said, every year you can count on at least one surprise powerhouse. Maybe Bachelor Nation's beloved Grocery Store Joe will reveal an unexpected latent grace. Maybe Luna Lovegood will turn out to be even more magical on the ballroom than she was at Hogwarts. Audiences will just have to wait and see how all the tail feathers shake out.

Dancing With the Stars Season 27 premieres on ABC Sept. 24 at 8pm ET.

More Like This
Khloé Kardashian Reveals Tristan Thompson Proposed To Her Last Year & Why She Said No
10 Kid-Friendly Halloween Episodes From TV Shows Your Little Vampire Already Loves
The Best Movies Airing On Freeform’s 31 Nights Of Halloween In 2022
'The Proud Family: Louder & Prouder' Is Returning For Season 2 On Disney+