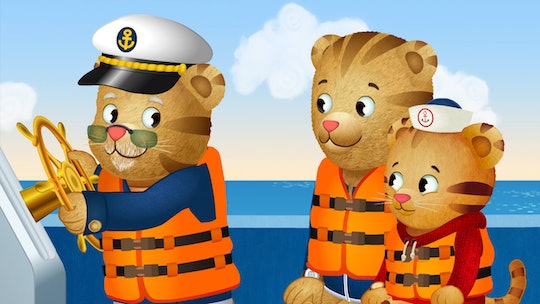 I would imagine if you're reading this you know all about Daniel Tiger, but if you're among the three people who don't, let me introduce you to this sweet series. 4-year-old Daniel Tiger is the son of the original Daniel Striped Tiger puppet from Mister Roger's Neighborhood. Every day, Daniel puts on his red sweater and ties his shoes (sound familiar?) and invites a new generation of preschoolers along on his daily adventures with pals O the Owl, Katerina Kittycat (she's my favorite!), Prince Wednesday, and Miss Elaina. With the help of Daniel and his friends, preschoolers giggle their way through each episode while learning practical skills necessary for growing and developing.

During Family Week, airing the week of Sept. 16 on PBS Kids, Daniel Tiger's Neighborhood will explore all sorts of family themes. In "Margaret's Birthday Buddy," Daniel's family is busy preparing for his sister Margaret's birthday party. Daniel struggles when the attention is not on him, until he remembers he can be a "tigertastic" birthday buddy and help make Margaret's day special. Any parent will tell you that their child has likely struggled with this very topic, so thanks to the show for addressing it and offering ways to deal with feeling left out.

Daniel Tiger's Neighborhood includes grandparents in their "Family Week" episodes, too. In "Daniel's Grr--ific Grandpere," Daniel Tiger gets to spend the whole day with his grandfather having fun together, and in “Making Mozies with Nana," Daniel Tiger gets to meet his friend Jodi's Nana. Jodi and Nana love the special things they do together, like baking sweet treats and coloring pictures.

In episodes "Find What Makes Your Family Special," "The Family Camp Out," and "A Game Night for Everyone," Daniel and his friends learn that though every family is different, each is special in their own way. What wonderful reassurance for a child who understands their own family might not fit the traditional mold, but guess what? That's perfectly OK. Meanwhile, children will learn that even when a day doesn't go according to plan, it's still good to be together in the episode, "Daniel Likes to Be with Dad." Finding the positive in a bad situation can be hard for adults to handle, so I appreciate Daniel Tiger's Neighborhood tackling this issue with the preschooler set!

I'm so happy that my younger child was at the right age for Daniel Tiger's Neighborhood when it first debuted in 2012. Not to sound like my mother, but there is a lot of junk on television these days. It is reassuring to know that I could put on Daniel Tiger's Neighborhood and feel confident that my child would be learning something while being entertained at the same time. With content that teaches emotional intelligence and human respect, the show's themes actually follow a curriculum based on Fred Rogers' teaching and research into child development. And we all know Fred Rogers was a prince among men (have you seen the documentary based on Mr. Rogers' life?) "Family Week" is just another way to share his legacy, and is brimming with warm family fuzzies for you and your little one to share. Say "Roar!" if you believe in quality children's programming!