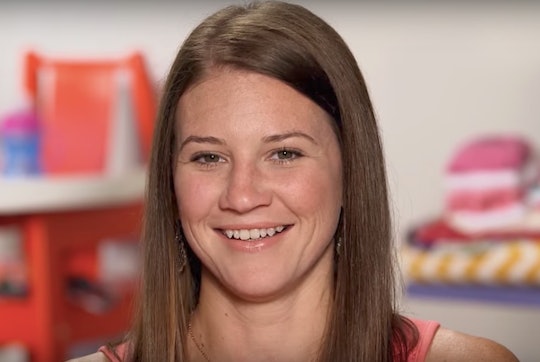 Quotes From Danielle Busby's Are Encouraging

Danielle Busby and her husband have six daughters. Yes, you read that right, six. They star in the TLC reality series OutDaughtered, along with their oldest daughter, Blayke, and their quintuplet daughters Ava Lane, Olivia Marie, Hazel Grace, Riley Paige, and Parker Kate. As you might have assumed, their beautiful quintuplet girls were the result of fertility treatments, and it sounds like it was quite a struggle for their family to be complete. Busby shares a ton of details about their lives on her family blog, It's A Buzz World!, and a lot of people take comfort in the quotes from Danielle Busby's blog that show moms they aren't alone in their infertility journey.

The mom to 2-year-old, all-girl quintuplets is pretty open about her struggles to conceive, both with her first daughter and the second time she and her husband tried to have another baby. And her blog is where she shares a lot of the most personal details about their journey, which took place before they ever had a hit television show on TLC.

Since, according to NBC News, one out of every eight American couples will experience infertility, and 1.1 million women will undergo treatment for it this year, Busby's struggles are extremely relatable to a lot of couples. Which is why it's so awesome that her blog has so many great quotes about the issue that she shares with the world.

Busby was honest on her blog about the toll trying to conceive the first time took on her marriage. In a long post about her infertility journey, Busby wrote:

During this whole time of going through infertility, obviously it is costly, time-consuming, and stressful. It definitely challenging time for Adam and I’s relationship.

Which is, again, probably very relatable to a lot of couples going through the same thing. There are a lot of articles and expert opinions out there about dealing with the stress of infertility, but Busby's honest take on the matter is a personal one that her fans probably appreciate.

And when Busby and her husband decided to try to have another baby, they knew they were facing a challenge, but probably had no idea the reward they'd receive at the end of it.

In a second section of the same "Infertility Journey" blog post, titled "Our Second Journey Through Infertility," Busby wrote:

It took us longer than we originally planned to try to grow our family the second time around. We knew we would be facing the same challenges with infertility as we did trying to have Blayke. We both prayed and prayed for years that we would not have to struggle as much the next go around.

And while it did take a little while, eventually Busby and Adam received a positive pregnancy test and knew they were expecting again. But little did they know things were about to get very interesting.

Later in the post, Busby described her surprise when, after several ultrasounds, they discovered that she wasn't carrying just one baby — not even close. She wrote:

So now we were looking at FOUR babies. Adam is about to pass out and I am laughing! All I think about is what I was asking God for in my prayers…'what do you want from me? what am I to learn this time?'

And she explained that when they later went back in for another ultrasound:

God had more in store for us. We immediately saw 2 babies in one sac…AND that was NOT there last time, lol.

And that's how Busby found out she was going to have five new babies to join her oldest daughter, Blayke. Her feelings are probably very similar to those of other moms who find out they're having multiples after trying fertility treatments, and she even had a humorous take on the whole situation that moms who are struggling or who have struggled with the same issue probably really appreciate.

And as many will likely attest, the emotional rollercoaster that is being a mom after struggling with infertility is not one that stops abruptly once you finally conceive and then give birth. In blog post about her quintuplet daughters' first birthday, Busby wrote:

Just the smallest things could trigger my memories back to where we were just a year ago in the NICU praying for these little tiny miracles. We could not have asked for a better and healthier year for the quints.

Memories of the NICU and gratefulness for happy, healthy babies are, again, something a lot of parents who struggled with infertility can definitely understand.

The aforementioned quotes from Busby's blog about her journey as a parent trying to conceive, and then her life with six kids afterward, are ones that every parent should see. She's honest about the struggle, and encourages others not to give up if they, too, are having a tough time trying to expand their families.