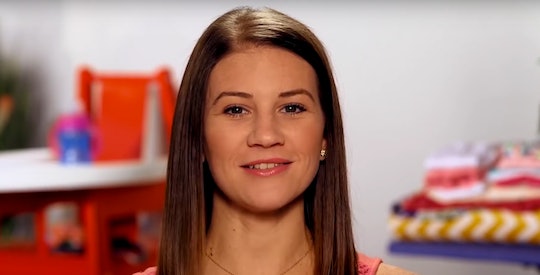 Danielle Busby, star of TLC's OutDaughtered, spends a large amount of her time thinking about her daughters. After all, she has a lot of them, and right now, they seem to run her life. But Danielle Busby's quotes about her daughters show that, even though the mother of six may get overwhelmed by having toddler quintuplets (as well as a 6-year-old), she's so grateful for her big, beautiful family.

Danielle and her husband, Adam, struggled with infertility for years before having their first daughter, Blayke, via intrauterine insemination (IUI), and then ran into roadblocks again when trying for another child. But in 2015, they got their wished-for second baby, and then some, when Danielle gave birth to quintuplets. The couple made history by having the first all-female quintuplets in the United States, and got a TV deal to boot. Now, fans can watch Danielle and Adam deal with the joys and struggles of having six young children on OutDaughtered.

Still, even though the girls may occasionally drive Danielle crazy, it's clear how thankful she is for them. The birth of her quintuplets was a scary process, given that none of the babies weighed over 3 lbs when they were born. But to Danielle, all the worry was worth it when she got to hold one of her daughters for the first time. As she said on the Today show,

That moment where you finally get to touch your baby and hold them, there’s no better feeling than that.

It's clear that each daughter is special to Danielle in a different way. She posted on the family's blog, It's a Buzz World, about Blayke's sixth birthday, writing,

You are growing up faster than I can keep up with and I could not ask for a better YOU! I love you to the moon and back, and further than that.

And in an interview with Channel Guide, she described the different personalities of her little quints. There's "jolly" Olivia; "chunky monkey" Ava, who is "the big one, but she’s so sensitive"; "sporty" and "observant" Parker; "cuddlebug" Hazel; and Riley, about whom Danielle said,

She’s just a little turd! [Laughs] She’s so bad... But she’s so stinkin’ cute and she’s so smiley. She just has an attitude already.

Still, Danielle admitted that there are times it can be hard to be a stay-at-home mom with so many babies, telling Channel Guide,

I love my job. I’m a mom and it’s everything I wanted it to be, growing up. I never thought it would be real, that I would get to stay home with my kids. But now I do and it’s wonderful — but I am surrounded by babies all day, and it’s hard for me to try to get time away to go get my hair done, or to go take a nap.

Still, she and Adam handle all the challenges of having quints with good humor. Danielle recently told Fit Pregnancy,

We go through so many wacky days, it's almost comical in our house when all of the babies just start screaming. We just laugh at so many things.

It's clear Danielle wouldn't trade her life now for anything. Listening to how she talks about her husband and daughters, it's hard not to love the whole, enormous family.