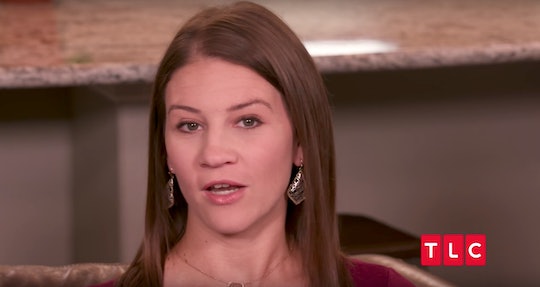 There's just something about reality television families, isn't there? Whether you relate to the Kardashians, the Gaines, the El Moussas, or the Duggars, watching families live their lives out on national television is equal parts refreshing and entertaining. And with their hit show, OutDaughtered, the Busby family has taken their rightful place in America's hearts as the adorable, engaging family of eight. Matriarch of the Busby clan, Danielle, is a proud mom, wife, and hardworking entrepreneur. On top of that, she's pretty inspiring. In fact, Danielle Busby's quotes about motherhood will show you that being a mom is equal parts exhausting, energizing, and totally unique for each mom out there.

Not only is Busby mother to her quintuplet daughters, Ava, Olivia, Hazel, Parker, and Riley, who are all 2 years old, but she's also responsible for the couple's oldest daughter, 6-year-old Blayke. On top of that, Busby and her husband, Adam, have also opened a cycling studio in their hometown of League City, Texas. But Busby is used to being busy. As a mom of six, she's no stranger to dealing with stress, or unexpected circumstances. But all of the craziness in her day-to-day life is part of what makes Busby so ripe with knowledge, wisdom, and advice. Because, seriously, popping out five babies? She deserves some kind of medal for that.

In an interview with Style Blueprint, Busby spoke of the shock she felt when she found out she was having quints. But she also recognized that it was totally meant to be.

I always had hopes to be a mom and have a big family. Adam was like, “Let’s have one and spoil the heck out of it,” and I was like no, we need at least three. We knew with our infertility struggle that this was going to be our last round of trying to get pregnant and trying to have a sibling for Blayke. Well then it turned out that we’re having our large family all at one time, so I kind of take it as God’s humor.

She Recognizes That Bad Days Exist

In her interview with Style Blueprint, Busby gave some sage advice for other moms out there who are stressed to the max:

There is always tomorrow. A lot of people ask, “How do you do it?” and the No. 1 thing is I start my day off with trying to keep God as the focus, so with a devotional and keeping my head clean and telling myself I was given this life to take care of and to be the mother of these extraordinary babies and Blayke, and that’s what I’m going to do every day. And it’s gonna be challenging, but there’s always the start of tomorrow, and you will get through it.

She Knows That The Terrible Twos Are Real

Right now, the Busby quints are 2 years old. And for Danielle, that isn't exactly a relaxing time. But she knows that that isn't a comment on her parenting, it's just the stage the girls are in right now. On OutDaughtered, she said:

The babies are at that age where monkey see, monkey do. When one does, they all do! So trying to teach them a lesson, as always, backfired.

Motherhood Can Seem A Bit Repetitive, In Her Opinion

Speaking with Style Blueprint, Busby mentioned her daily routine, and how demanding it can be:

And it’s just the same Groundhog Day routine every day. You do bottles, milk, breakfast, get them dressed, play, they nap and that’s when I shower or do some laundry, constantly the dishwasher, constantly cooking or making food, constantly cleaning up, and they usually go to bed about 7 p.m., and then you start the dishwasher for the night and start over again in the morning.

But really, from what's seen on OutDaughtered, and what's shared on the Busby's Instagram account, the family is handling everything that's thrown at them with grace, humor, and realism. And isn't that what motherhood is made of?