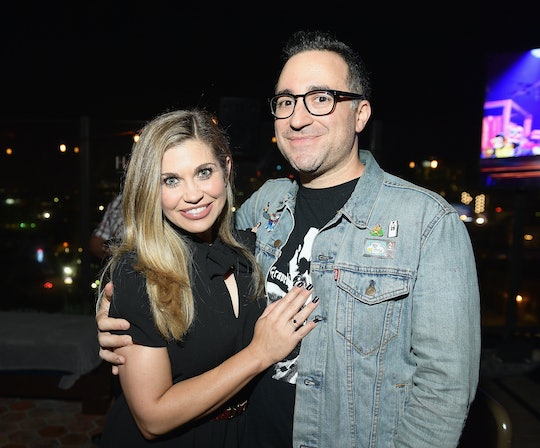 Boy Meets World star Danielle Fishel and her husband, Jensen Karp, welcomed their first child into the world on Monday, June 24. But fans who have been following along with their knows that it hasn't been easy since her son ended up in the NICU after birth. But now, Danielle Fishel is opening up about her son's rare condition in a new interview with People, bringing attention to his serious issue.

Fishel gave birth to her first child — a son, named Adler Lawrence — earlier this summer. And in the months since then, Fishel has been updating her fans and followers on Instagram about her son's health and progress since being born four weeks early. In the posts, she revealed that Adler was born with fluid in his lungs and had to spend his first few days of life in the NICU. Since then, Adler has graduated from the NICU and seems to be adjusting to his life at home quite nicely. But now, for the first time, Fishel is talking openly about her son's diagnosis and what that means to their family.

As it turns out, Adler was born with chylothorax, according to People, which is the collection of lymph fluid in the lungs, or a leak in the lymphatic system, according to VeryWell Health.

"Unfortunately, my breast milk was creating fluid in his lungs, and we had to take him off breast milk and put him on specifically formulated formula that doesn't use the lymphatic system," Fishel told People.

There are several ways to treat chylothorax, all of which have the same goal of draining the fluid to keep it from building up again. Doctors will try to drain out the fluid with a tube or needle to help the baby breathe better, according to People, and Adler's lungs were able to heal on his own. This is fantastic news, especially since the long term outlook on chylothorax is very good, according to the Children's Hospital of Philadelphia — nearly all patients can be cured.

Fishel told People that Adler's time in the NICU changed the way she viewed things. And by sharing her story, she has the power to bring ease and comfort to other parents whose newborns are going through the same exact thing. "In the long run, when we ended up at the children's hospital, and we saw the other things that children and parents are facing, we put it in perspective and we were just so happy to have Adler with us," she said.

"For every first time parent, it's an adjustment to know it wasn't ideal, but he's healthy and he's going to make it. We have the best doctors around us, etc. Those are the kind of things you ease into."

Although her son's diagnosis might have thrown her in for a loop at first, Fishel sounds more than prepared for the road ahead of them. Adler has already met her Boy Meets World costars, and seems to be loving their pet dog, Brunch. But in spite of already doing so much together, there is one thing that Fishel won't be doing with Adler — showing his face on the internet. In an Instagram post, she wrote that her and her husband are keeping their son's face off of the internet until he his old enough to make that decision for himself. "Being a parent and making decisions for your kid is tough," she wrote.

She has no idea how right she is about that statement. But so far, it seems like she and Karp are doing an amazing job at making decisions for Adler. Especially when it comes to his health.