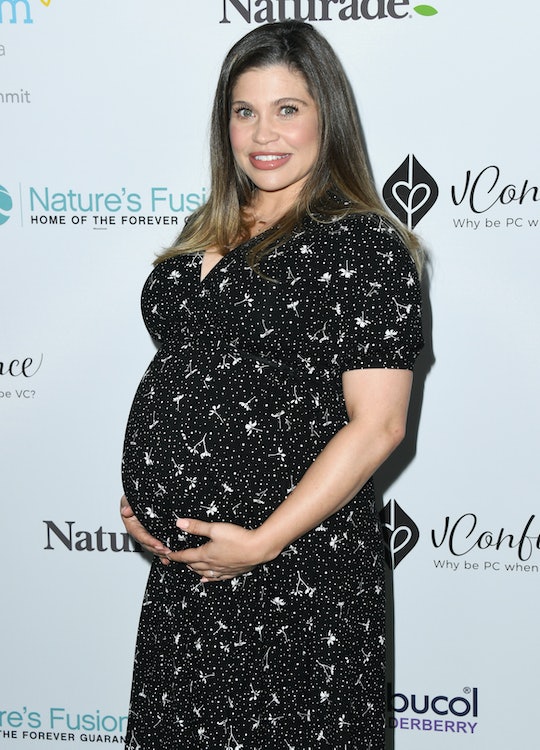 Bringing home a newborn from the hospital can be simultaneously exciting and terrifying. On one hand, new parents are probably thrilled to head home after a multi-day hospital stay — and to settle in with their new little one, of course. On the other hand, there's often that scary realization of, "Oh, sh*t. What have we gotten ourselves into?" Between round-the-clock feedings, dealing with spit-up, middle-of-the-night diaper changes, and worrying if you're doing it all right, those first few weeks can feel like a blur of love and exhaustion. And Danielle Fishel's post about finally having her newborn at home will make you emotional.

The Boy Meets World star — who played Topanga in the popular '90s series — welcomed her first child with husband Jensen Karp, Us Weekly reported. Their son, Adler, came four weeks early and had to stay in the NICU for three weeks following his birth. Recently, though, baby Adler graduated from the NICU. And on Friday, July 19, the new mom took to Instagram to share an extremely relatable update with her followers.

"The house is a mess, I have a stye on my left eye, I haven't showered in two days, I can't remember when I did anything (when did we change his diaper last? What time did I pump?), @jensenkarp and I now take baby night shifts where we pass each other like zombies on a mission, and they are some of the best days of my life. ❤️" Fishel captioned a photo of her son's tiny feet against their dog's fur.

Judging by the comments, it seems plenty of Fishel's fans have been right where she's at before. One Instagram user wrote, "You’re in it mama. Best and hardest days. Relish in it."

Another person commented, "Those are the best days for sure, even though your body is running on fumes in a zombie state, but it is all pure LOVE!"

Yet another Instagram follower chimed in with, "Love this so so much. It’s very hard but the most rewarding job ever!"

On July 1, Fishel revealed that her water broke on June 20 — four weeks early. Fishel was immediately hospitalized, and her doctor ended up discovering fluid in her unborn son's lungs. Adler arrived four days later. "We still don't have Adler home with us because the deeply good doctors and nurses in the NICU are working diligently to find out why the fluid is there and determine the best way to get it out," Fishel wrote at the time. "This has been the most trying week and a half of mine and @jensenkarp's lives but we have gotten through it with the support of our incredible family and friends who have shown up for us in unexpected ways."

The next update came on July 12. "We're still in the hospital but Adler is getting better and stronger every day," Fishel wrote. "@jensenkarp and I keep reminding ourselves that we are extremely lucky — Adler *will* eventually come home with us — and therefore this is nothing but an enormous test of our patience and willingness to relinquish control."

As Today reported, Fishel and Karp were finally able to leave the hospital with their baby boy on July 16 — after Adler had spent three weeks in the NICU.

"Adler is 3 weeks old today and officially a NICU graduate! Thank you to everyone at @childrenslaand especially our primary nurses @cassiejosharrod and @quyenlyyy," she captioned a photo of her little family approaching a hospital door with an "exit" sign above it. "We never wanted to know this hospital and its staff so well but now that we do, we can say with certainty there is no better place for children with medical needs. Now we hope to never be back. :) Finally, our love and hugs to every single parent who has ever spent time in the NICU and especially those we left behind today."

I'm so glad baby Adler is finally at home after his NICU stay. As difficult as those first three weeks must have been for Danielle Fishel and her husband, it's clear they're finally getting to experience the "normal" parts of new parenthood. And as cliche as it may sound, my only bit of advice is this: Cherish these messy, sleep-deprived, amazing moments — because it really does go by in the blink of an eye.