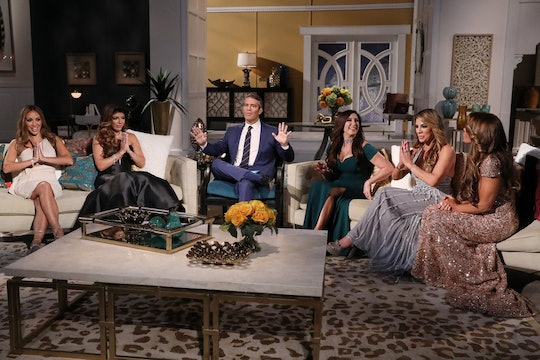 Danielle Staub Is Back On 'RHONJ', Rejoice!

Seriously: down to the furniture-throwing and fights with Danielle Staub, it's all the same. In eight years it seems the only thing to change is the surrounding cast and the height of the ladies' hair. At the moment, the trailer has been made available exclusively on People, and it's absolutely worth a watch. The upcoming season seems like it's going to be packed with problems — including plenty of boozy events to attend, family disagreements, and new cast members causing a stir. Danielle's return as a Friend of the Housewives is sure to bring the drama, but the newer women aren't slacking in that department either. A trip to Milan tops off it all off, and the trailer seems to promise that Season 8 will be one to remember.

But for as much conflict as there seems to be in Season 8, don't expect a repeat of Danielle and Teresa Giudice's iconic tossing of the table. The two former enemies have set asides their differences and now bond over a shared love of yoga and Jamba Juice. It looks like some things have changed after all.

Instead Danielle will be butting heads with Dolores, while Teresa turns her signature vitriol on recurring sort-of-friend Kim D. "You know what Posche stands for?" Teresa shouts at her in the trailer, referring to the name of Kim's boutique. "Piece Of S**t Coke-w***e Home-wrecker Everyday."

What a mouthful. It's a string of insults that are sure to become almost as memorable as the ones spewed at Season 1's table flip (you know the ones). But when viewers aren't watching the women create nasty acrostic poems for one another, they'll be meeting brand new housewife Margaret Josephs, whose defining quality in the trailer is an inexplicable penchant for pigtails.

When The Real Housewives of New Jersey returns for its eighth season on October 4, it looks like its going to be a wild journey from start to finish.