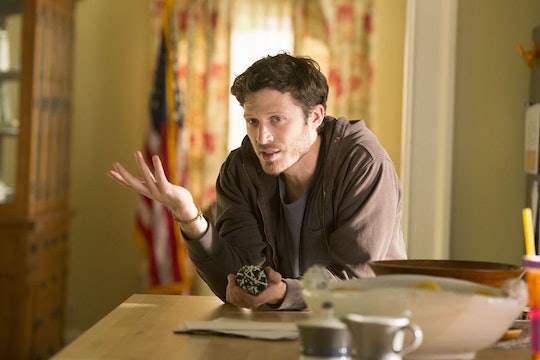 Danny Questions Adam's Identity On 'The Family,' & The Evidence Is On His Side

OK, maybe I'm just uber-paranoid, but I don't think Danny questioning who the new "Adam" is is all that crazy. The first episode of The Family showed Danny as one of the more skeptical family members of the Warren clan, and Episode 2, "All You See Is Dark," kept at that trend. Except this time, Danny's paranoia has a little more support. The question of is this the real Adam on The Family? is something we probably won't learn for a while, but Danny seems to be getting closer to Adam's identity week after week.

This week's episode seemed to be setting up Danny and Adam for some brotherly love. Just like 10 years ago, Danny is put in charge of watching Adam by spending the day at the mall and going to the movie. Danny, who isn't thrilled to be on babysitter duty, is reluctant to hang out with his brother since he was already a little skeptical of who the boy claiming to be Adam was. Now, those reservations have only heightened thanks to Adam's not-so-convincing memories of being a kid.

There were a few moments throughout the second episode that were building to Adam remembering things from his childhood. For example, he remembered that Danny's taillight was broken. He also remembered the style of shoes he wore the day he was abducted, and that Danny was a football player who broke his arm. All of these would hint that Adam is the real Adam and actually remembers things from his childhood, right?

While becoming well-acquainted with the fireplace's mantel, Danny realizes that all of the memories Adam has brought up in the last day are things a complete stranger could gather from looking at the photos on the mantel. For instance, there's a photo of Danny's car with a busted taillight. There's a photo of Danny with a broken arm and another of him in football uniform. Finally, there's a photo of Adam the day he was abducted, wearing the shoes that he saw at the store with Danny earlier that day.

So, are these memories real or are they pieces of information Adam picked up while snooping around the Warren house? It could be a huge coincidence, or maybe it's just Adam's way of becoming familiar with his surroundings. Then again, this could be an imposter posing as Adam, because let's not forget this is a drama and that would be one hell of a twist to throw at us in the final moments of the season finale.