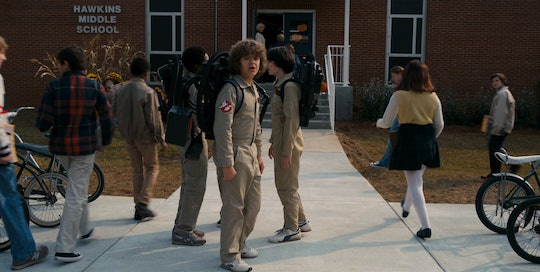 Dustin spent Season 2 of Stranger Things broadening his horizons and making new friends: he invited recent Hawkins transfer Max into the gang, shared beauty secrets with Steve, and even welcomed a baby Demogorgon into his life, christening the creature "Dart"(full name D'Artagnan). It wasn't clear whether Dart survived the finale or not, but these Dart theories from Stranger Things Season 2 might make you rethink the fate of Dustin's former pet.

When Eleven closed the rift between Hawkins and the Upside Down, it seemed like all the "Demo-dogs" met a grisly end. It was mostly no hard feelings on that front: they were Demogorgon-lite monsters out for blood. But saying goodbye to Dart wasn't quite as easy. Cat-snacking aside, Dart had proven himself to be genuinely attached to Dustin thanks to all that nougat-y bonding they did when Dart was still a tiny slug. He may have been caught in the crosshairs, but there is still a chance that he survived.

But those paying very close attention during "Chapter Nine: The Gate" may have caught the shot of the Demo-dog quietly expiring next to a candy wrapper. Hope might be lost for Dart after all, though these theories try to figure out how he could still fit into Season 3.

Reddit user Clown_Dream took a more positive spin on Dart's last scene: those little chittering noises he was making weren't a death rattle, they were just a snore. This user speculated that after consuming all that tasty nougat, Dart just laid down for a nap in the tunnels.

Dart could have been laying groundwork for the idea that creatures from the Upside Down can be tamed and utilized for the forces of good. The finale hinted that the Upside Down will remain a threat despite the closing of the rift, so perhaps the kids will use what they learned with Dart to draw some of the creatures to their side.

The Power Of Friendship

Redditor npocmaka speculated that Dustin's bond with Dart could have been the very thing that saved Dart from death. They theorized that Dart was not fully connected to the Shadow Monster like the rest of the hive mind because he was somewhat connected to Dustin. That could mean that he wasn't caught up in the mass death when the rift was shut.

Npockmaka also wondered whether the substance Dustin inhaled while in the tunnels could also lead to a deeper bond between Dustin and Dart. Perhaps it would make Dustin more enmeshed with the Upside Down, or even open him up to be another host of the Shadow Monster.

But Reddit user Mykcuh was asking the real questions: what the hell happened to Yertle the Turtle after he was unfairly ousted from his habitat for Dart? The two creatures were left trapped in Dustin's room together, and that could have led to a major transformation for poor Yertle. Or even... romance? Who knows what kind of creature could result from the union of a turtle and a Demo-dog — it could even be next season's new villain. As Redditor CharybdisXIII added: "Season 3 will be demidogs [sic] with shells. Heckin [sic] bulletproof."

The most logical outcome is also the most obvious one: Dart probably did die in those tunnels, a consequence of shutting the door on the Upside Down. But his life and death were not in vain: he got a better send-off than any other creature from the other world, and he even got to redeem himself a little for turning Mews into lunch. Dart lived a good life full of nougat and while he may be gone, he certainly won't be forgotten.