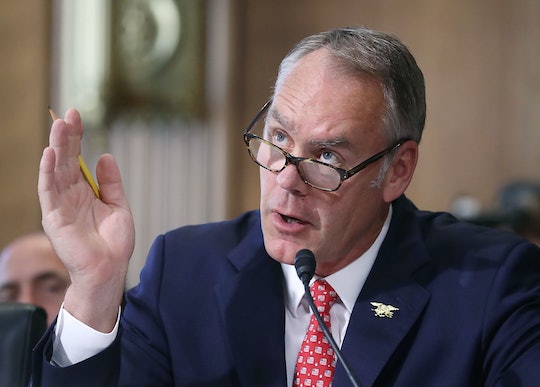 Since announcing a ban on transgender service members in the military earlier this summer, President Donald Trump has been the subject of criticism by a number of people. One of the most recent and more interesting sources of backlash came from the daughter of Trump's Interior Secretary, who slammed Trump's transgender ban and denounced his divisive plans on Instagram. Jennifer Deltefsen, a Navy veteran and Ryan Zinke's daughter, pointed out Trump's lack of military experience and called him a "disgrace" for proposing this ban.

Zinke's daughter, Jennifer Deltefsen, originally wrote her post in late July, but it recently started circulating again and has since gone viral. Both Deltefsen and her father are Navy veterans, a fact that was frequently brought up during Zinke's campaign for re-election to the House. Zinke then went on to be chosen by Trump to head the U.S. Department of Interior.

Despite her father's prominent role in the Trump administration, Deltefsen went after the president on Instagram. The main image for her post was a screenshot of the NPR story detailing Trump's tweets explaining the ban. Her caption to the post was as follows:

This man is a disgrace. I've tried to keep politics out of my social media feed as much as possible, but this is inexcusable. This veteran says sit down and shut the f— up, you know-nothing, never-served piece of sh*t. #itmfa #wtf

Detlefsen's post received many comments from current and prior military service members sharing their approval and support. One such comment, from a fellow veteran, pointed out the bravery behind her post:

Thank you for standing up for what's right. Not an easy thing to do given your situation. But then again, that's the difference between someone who has actually served and a dilettante. You make the sacrifice while the poseur just yaps and takes credit for things that fall their way.....and run when the bullets and fists fly. #veteransagainsttrump#pride

Not all of the comments on Detlefsen's post were positive, though. One commenter berated the Navy vet and even went so far as to suggest limiting her right to free speech:

Somebody should put a bar of soap in your mouth to clean it out. You have a right to your opinion but not to bashthe [sic] President of the United States. You, as well as so many others, are a disgrace. Is that how you talk to your dad when you disagree with him and spending time in the service certainly did not teach you any manners. Souch [sic] foul language and disrespect. That has become a huge problem with people nowadays. This push for freedom of speech had gone way to far! Shame on you!

According to The Billings Gazette, Interior Press Secretary Heather Swift denied requests for access to Zinke for an interview or an immediate statement. "This is not a matter related to the Department of the Interior so I cannot offer you a statement," Swift reportedly stated.

Romper has also reached out to Zinke's office regarding his daughter's Instagram post and is awaiting a reply.

Following her post, Detlefsen reportedly declined CNN's request for an interview. In an email to the news outlet, however, she separated her comments and beliefs from those of her father:

My views are my own and not at all related to my father's position; millions of other people have said the same as I did, and more eloquently. The thousands of transgender military service members who are under attack by this administration are the ones who should be given a chance to have their voices heard.

The transgender ban on the military has been one of the most controversial aspects of the Trump presidency. Numerous veterans and civilians alike have spoken out about the injustice of such a ban and it is not likely that Detlefson will be the last.