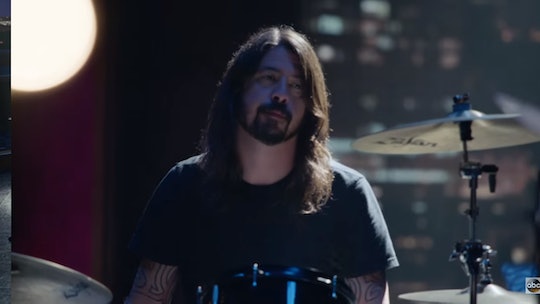 Dave Grohl & Animal Had An Epic Drum Battle On ‘The Muppets’

Have you been watching The Muppets on ABC? If not, you just missed a sweet drum-off between the Foo Fighters’ Dave Grohl and The Electric Mayhem’s Animal. The office comedy is a bit polarizing, with some fans (who live in my house and sleep in my bed) complaining that the new Muppets are too adult, and it’s weird to hear them make veiled references to S-E-X. Others (who live in my mirror) agree that it’s hard to get used to, but it’s kind of cool that the Muppets have grown up along with us. You can still watch old Muppet Babies episodes on YouTube if you’re feeling nostalgic (or if your kid’s in the room and you don’t want to explain to her what “the other kind of bear” is), but it’s kind of fun to see Kermit playing a Jim Halpert-like role, even if he is dating that second-rate pig, Denise.

Tuesday night’s plot revolved around The Great Gonzo, now the head writer of Up Late With Miss Piggy, going back to his roots as a daredevil. Piggy agrees to let Gonzo get shot out of a canon on the show as long he promotes her new venture, Piggy Water. Producer Kermit books Dave Grohl to sing his hit “Learn to Fly” as accompaniment. The Electric Mayhem (now Piggy’s house band) backed him up, adding a trumpet to the original arrangement that I thought was a real improvement. But the real fun came at the end of the show, when Grohl returned to his roots as a drummer. “I’ve been waiting years for this, Animal,” he snarls, and the two battle to see who’s best. I won’t spoil it; you’ll have to watch to see who the victor is.

But what’s this about “waiting years”? Do Grohl and Animal actually have beef? You bet they do. The two first met in the 2011 movie The Muppets, when Grohl was performing with a Muppets cover band, The Moopets. The band, led by Fozzie, was otherwise comprised of off-brand Muppets, including Grohl’s Animool. They eventually end up conspiring with the villain, Tex Richman, who wants to demolish the Muppet Theater, but ultimately, the Muppets were victorious (of course). So as you can see, this drum-off was a long time coming. #TeamAnimal