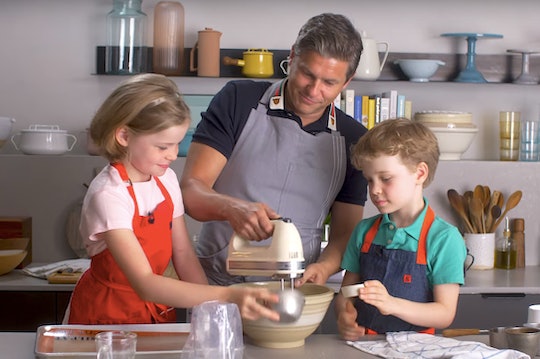 Making your kids a part of your time in the kitchen is important, not only for their own development, but also for bonding as a family. And if you need a little inspiration on where or how to start, you're in luck. As part of a brand new video series for Food52 called More Ketchup, Please, you can watch actor and chef David Burtka cook gourmet popcorn with his twins, which might be the cutest and most endearing video on the internet at the moment.

Burtka, who shares 8-year-old twins Gideon and Harper with husband Neil Patrick Harris, recently released a cookbook, Life's a Party, in which he shares his years of knowledge from working in the food industry, sharing everything from "extravagant holiday bashes to casual, intimate evenings with friends to everyday home-cooked family meals," according to the Food Network. But beyond sharing his skills through his new book, Burtka is also dishing his knowledge and tips in the first episode of More Ketchup, Please, which aired today, July 11.

In this week’s episode of Food52's new mini series, Burtka teamed up with two of his biggest (little) supporters — his kids. The trio went on camera to cook a few popcorn recipes together, aka a "popcorn bar," which proved to be easy enough to be kid-friendly, but interesting enough (they made curry popcorn at one point) to still appeal to adults. They also whipped up a bacon fat popcorn recipe as well as sweet-and-salty popcorn with mini meringues. Oo la la.

"My secret to cooking with these kids I think is to have fun," Burtka says in the 12-minute video. "It's to get as much organized as you can, and then let it go from there. But let them have fun. Reign them in when you need to reign them in, but remember, ya know, food is fun."

Aside from being a super famous family, Burtka insists that they conduct dinnertime like anyone else. For example, when it comes to meals, there's no plan B, you have to eat what's served. "I think that some parents also don't want to put up a fight and don't want to argue with their kids so they'll just make a second meal," Burtka said in an interview with Gays With Kids earlier this year. "You know, there's no option in our house, there's no second meal. What we're eating for dinner they're eating for dinner."

Fortunately, Gideon and Harper are pretty good eaters, as seen in this new video for Food52, which may not be totally surprising if you follow this adorable family. For example, Burtka previously told People that they are, in fact, pretty open to new experiences. “They have incredible palates," he told the magazine in 2015. “Gideon eats everything you put in front of him. His passion for cooking and eating good food is in his soul."

Burtka and his twins starred in just the first episode of More Ketchup, Please. In fact, several more guests will star in upcoming episodes with their own kiddos, such as chef Dan Kluger, visual the host of the Cool Moms podcast Elise Peterson, and author Hetty McKinnon.