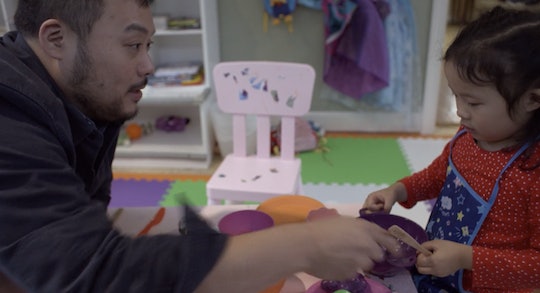 The best food shows are not about the food, and Season 2 of Ugly Delicious, David Chang's warm and funny Netflix documentary series, proves the rule. Episode 1 opens on Chang FaceTiming with his parents as he tells them that he and wife Grace Seo Chang are expecting a baby. His father, visible mostly as a forehead on the iPhone screen in the style of Boomer parents everywhere, cries as he tells him, "It's the happiest moment in 60 years in this country." Both sets of mothers are screaming with excitement as his dad quietly exclaims, "You have a baby, you have a wife," as if he can't believe how good life has been to his family.

Ugly Delicious takes viewers inside their prejudices around food and culture — Chang briefly performed delivery for Dominos Pizza in Season 1, while in Season 2 Padma Lakshmi asks aloud why Indian food has escaped the upscale hipster appropriation that has seen Mexican and Vietnamese food rebranded as peak sophistication, for example. Chang offers himself as naive layman, asking honestly whether rare steak at a fancy steakhouse is truly better than a well-done slab at Outback Steakhouse. Here, the moment of reckoning is between chef David Chang and dad David Chang, as he puts it himself, and between the demands of the restaurant industry and parenthood. In "Kids Menu," he genuinely wants to know how everyone is doing it.

"Most things in life I just figure it out by f*cking it up," says Chang in the episode. "The difference is f*cking this up might really have serious repercussions on something, like this child."

And we are off and running with Grace and Chang, as they prepare to welcome a baby; a ride that is weirdly comforting to watch for those who have already completed a lap.

Grace heads out for omakase sushi with economist Emily Oster, who talks about the strict rules we enforce around pregnant women, including of course the one instructing that sushi be treated like kryptonite.

Meanwhile, Chang is hanging out in kitchens with his chef-friends with kids — people like Tom Colicchio and Reem Assil. He tries making baby food with Nick Kroll ("Baby food is pretty simple, you cook the sh*t out of it, you puree it so it's easy to eat, it almost all of it tastes terrible, because there's no salt," Chang concludes), amaking healthy, delicious, and cheap food for middle-schoolers with Dan Giusti, the former head chef of Noma, and watching Japanese middle-schoolers carry out their own lunch service in Tokyo.

Partway through the episode, we learn a little more about Chang's journey to fatherhood. Grace has alluded to the fact that her husband keeps crying, and he admits that after a year and a half of trying, "I was really worried that it probably wouldn't happen." The couple conceived the day after friend Anthony Bourdain died, and it guts Chang. "The last thing i wanted to do at that time was bring life into the world," he says. Explains Grace, "He couldn't process how life and death can pass each other by so closely."

Anchoring the episode are the couple's families, who joke around and cry and make each other food. "They're going to be good parents," says Chang's mother at one point, "especially Grace."

Chang worries he will won't be a good father, but as birth approaches, having seen him cook for and play with so many little critics, you think differently. "The alternative is I just want to make bento boxes for their school lunches," says Chang. "That would give me a lot of pleasure."