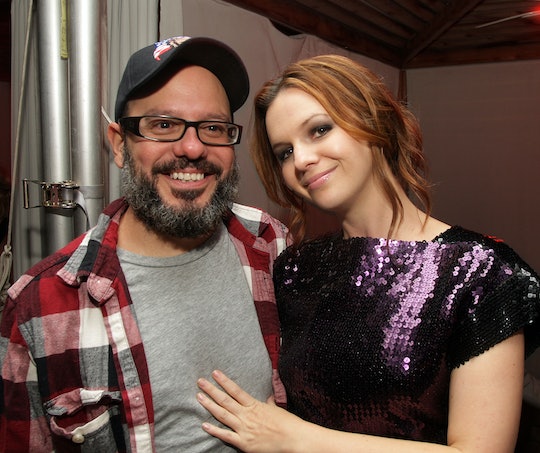 Crazy things happen between a couple parenting a new infant, usually bringing them closer together as they brave their new world of diaper changes, sleepless nights, and countdowns to a time they might get to shower. Some couples get really close. Like David Cross, who tried wife Amber Tamblyn's breastmilk — and "loved it."

Cross and Tamblyn married in 2012 and welcomed their daughter in late February — and apparently the new dad was getting a bit curious about this whole breast milk thing. Tamblyn told Us Weekly that she sort of tricked him into it at first. She said, "I was like, ‘This is an honorary thing that husbands have to do is drink their wives’ breast milk!'"

Though she advised him to just have one little sip, the 54-year-old comedian went all-in. "He loved it," Tamblyn joked. “I was like, ‘Have one sip. And he drank the whole thing," she said. The Paint it Black director explained that it was in the name of keeping tiny Marlowe safe. “I came home late at night and I'd had a bourbon so I obviously couldn't give it to my child. It was my birthday gift to myself. My first bourbon I think in a year and a half," she said.

This wasn't the first time Cross tried it, either.

It was amazing! I had some very early on, it was very sweet. And then last night, I had the tiniest little bit. It was not sweet, it was very decadently, creamy, fatty, creamy. I don't know. It tasted like a desert you would pay $50 for. American dollars.

Hipsters beware: This could be the biggest thing since people started serving cocktails in mason jars. Cross isn't totally wrong about breastmilk being not-so-bad. Recently, it was reported that men who work out a lot were secretly sipping black market breast milk for its nutrients to beef up. (It's actually not all that healthy for adults, so don't try it at home.)

Tamblyn and Cross seem to have the most fun when it comes to parenting. When they announced Marlowe's birth back in February, they joked that her name was going to be "Dauphinoise Petunia Brittany Scheherazade Von Funkinstein Mustard Witch RBG Cross Tamblyn-Bey jr," which sort of has a nice ring to it. Later, Cross posted another picture of his daughter, joking that she looked like an old man from Brooklyn who sells furs.

The couple seems to have this whole parenting-with-a-sense-of-humor thing down. Because really, it's the only way to do it.