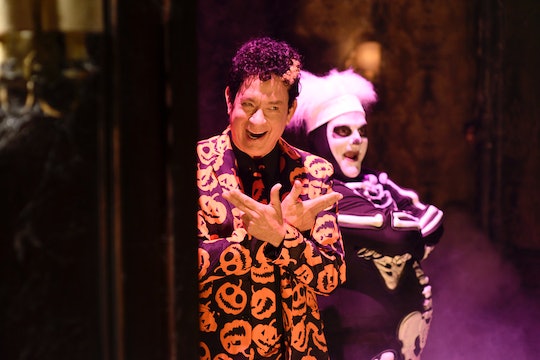 David S. Pumpkins Made A Comeback On 'SNL'

Although it seemed like Tom Hanks was just there to welcome The Rock into the five timers club during the opening monologue, Saturday Night Live writers had other plans. And we're so glad they did. Ladies and gentlemen, David S. Pumpkins returned to SNL this week for the finale and Twitter pretty much freaked out. The first time we met Mr. Pumpkins, played by Hanks, was back around Halloween, when he showed up in the "Haunted Elevator" sketch.

It was confusing, but also hilarious, which is exactly why it worked. In the sketch, Kate McKinnon and Beck Bennett tried to figure out why David S. Pumpkins, along with his two sidekicks, were in the haunted ride.

This time, he showed up in a sketch about a huge rap group led by Kenan Thompson. The joke there is that there are way too many cooks in the recording studio, so to speak, and one of them is David S. Pimpkims. Get it? Taking advantage of having Hanks around to reprise one of the best characters of the year was a great final touch for season finale this week. On social media, fans were flipping out about his return, proving that sometimes it's the random SNL sketches that are the best.

Here are just a few of the best reactions to Pumpkins' callback...

Although it was just a cameo in MC SnoCone's rap crew, it was worth it. Back when David S. Pumpkins first graced SNL viewers with his presence, fans and critics couldn't figure out just what it was that made him so great. The sketch was written by Streeter Seidell, an SNL writer, and Mikey Day and Bobby Moynihan, who played the skeletons.

David Sims wrote over at The Atlantic at the time that the only reason the original sketch really worked was because "everyone was 100 percent committed to the silliness." Sims added that Tom Hanks:

...somehow fully embodied the character of David S. Pumpkins — whoever that is. His dance moves were perfectly in sync with the inane synth music. There was a gleeful tone to his voice every time he asked 'Any questions?' The only time I’ve seen Hanks more locked into a bit is when he got caught in a dry-cleaning bag on an edition of Celebrity Jeopardy.

It's true — Hanks is totally committed to being David S. Pumpkins or Pimpkins. And I'm completely here for it. No question about it.