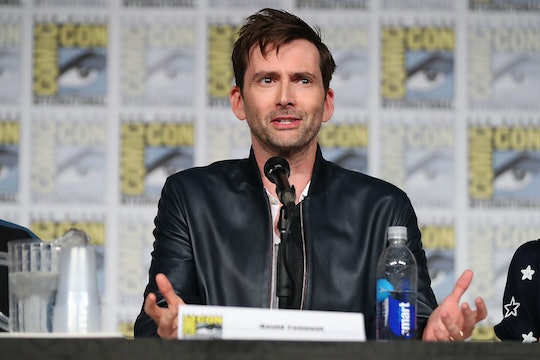 Many of Marvel's Netflix series have been noted for their compelling villains, and David Tennant's Kilgrave on Jessica Jones was no different. Kilgrave was the bleakest villain of them all: an egotistical rapist who used his mind control powers to get whatever he wanted without sparing a thought to who got hurt in the process. Tennant's performance was chief among the reasons Kilgrave made such an impact, but he was so deeply vile that it was incredibly satisfying when Jessica snapped his neck in the Season 1 finale. It seemed like the end of Kilgrave — until it was revealed that David Tennant will return for Jessica Jones Season 2.

Entertainment Weekly announced the news with a picture from the set of Season 2 that showed Tennant alongside star Krysten Ritter. But they withheld the details of his return, meaning speculation can run wild as fans try to figure out just how big a role Tennant will play in the upcoming season — and just how Kilgrave ended up coming back in the first place. His death seemed pretty definitive (there's really no way to recover from a superhero-powered neck snap) but there are a few different scenarios that could make his return make sense.

Kilgrave could be resurrected, which is something that's definitely possible within the world of superheroes and super-science that Marvel has created. It's also something that will be dealt with on The Defenders with Elektra, who was killed at the end of Daredevil Season 2 but will be brought back to life by the antagonistic group the Hand to be their living weapon. That makes resurrection all the more plausible, though it's harder to pin down who would actually raise Kilgrave from the dead. He was a solo villain; he doesn't have any mystical groups hanging around to save him.

The most realistic option is that Jessica is still struggling with PTSD in the wake of Kilgrave's abuse. His death was likely a relief for her in many ways, but that doesn't mean it suddenly solved all of her issues. In Season 2, there's a chance that Jessica could see Kilgrave in dreams or hallucinations without him actually being alive again. He haunted her throughout the first season, so it would make sense for him to continue to manifest in that way as Jessica deals with her trauma.

Flashbacks could be another way for the show to bring Kilgrave back without resurrecting him. Jessica Jones used flashbacks sparingly but effectively in Season 1, and that could continue into the new season. However, not showing the majority of Jessica's abuse was a good way for the show to avoid sensationalizing what happened and instead focus on the aftermath, so hopefully it won't wallow in the details of what Kilgrave did to Jessica. The audience already knows what happened; they don't need to see it.

It's no surprise that Kilgrave will be back after Tennant's portrayal received so much acclaim, but the circumstances of his return are uncertain for now.