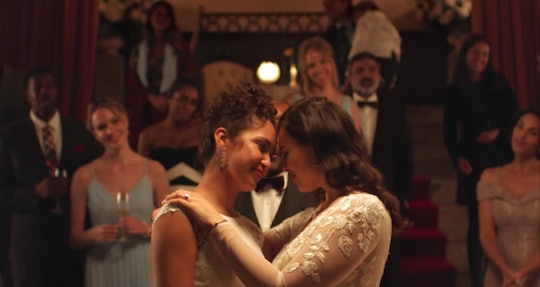 David's Bridal's newest commercial spot is entitled "Rewrite the Rules" — and in just 30 seconds, the bridal company showcases four different couples doing just that on their wedding days. Among several other things not typically seen in bridal adverts, David's Bridal put a same-sex couple in its new commercial. And so far, people are loving the spot.

"Something old, something new, something borrowed, something blue—and we empower you to #RewriteTheRules and make your day something you," David's Bridal captioned the commercial on YouTube. "Rewrite the Rules" features scenes from several weddings, one of which is celebrating two women, who also happen to make up an interracial couple. The two women happily and lovingly dance together in their wedding dresses, until one of their fathers cuts in for a dance with his daughter.

"We wanted to make sure this spot represented what we see from brides today," Liz Crystal, chief marketing officer for David's Bridal, told Ad Age. "We value every type of bride."

It's delightful to see David's Bridal fighting against heteronormative stereotypes (which, yes, David's Bridal has probably helped perpetuate since it opened nearly 70 years ago). And not only that, but by showing a wedding with two brides, the store gets to showcase two wedding dresses in one shot. Now that's some good advertising.

David's Bridal is not the only wedding-related retailer to include same-sex couples in its advertising. In 2015, Tiffany & Co. featured a gay couple in its "Will You?" campaign, as per CNN; and in 2016, jeweler Zales featured two women getting married in a commercial as part of its "We Believe" campaign, NewNowNext reported.

Many people took to Twitter to applaud David's Bridal for the commercial. "Love this," one Twitter user wrote, followed by a heart.

And as mentioned above, David's Bridal shows off several other brides and grooms defying typical wedding day conventions in the 30-second spot. The commercial opens with a young woman walking down the aisle by herself — without a father escorting her or giving her away. She is then greeted by the man she is about to marry, showing that they are an interracial couple. The second couple to tie the knot in the commercial look like a typical bride and groom from the back — but when the camera pans to their fronts, it's revealed that they are holding a toddler. The third couple is the aforementioned same-sex couple. And then the fourth couple is a young, model-esque man and woman, frolicking barefoot on the beach. OK, I'm not sure exactly what rule that last wedding is re-writing, but hey, they look pretty!

On-screen representation is so important, and it's great that David's Bridal is acknowledging the fact that not every wedding is between a white heterosexual couple. Hopefully many more companies follow suit in the near future, and join David's Bridal in rewriting the rules.