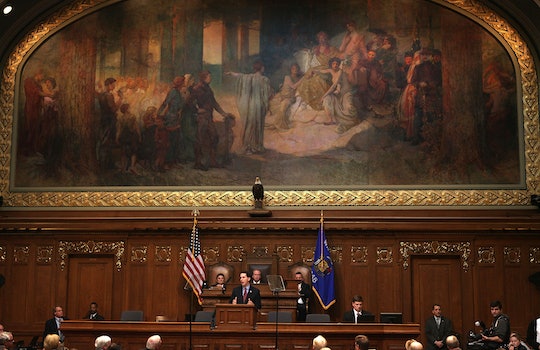 "Deadbeat Parents" Bill Is More Harmful Than It Seems

For the most part, ensuring that children are taken care of is something that both Republicans and Democrats can agree on. On both sides of the aisle, it's pretty common rhetoric that the children of this country matter, and should be a priority. However, sometimes those stances take on a more fringe viewpoint, and when child support and welfare is involved, Republican lawmakers tend to take actions that err on the more extreme side of things. Wisconsin is a dangerous example of that, as the newly-proposed "Deadbeat Parents" bill is more harmful than its text might indicate.

The new bill, Assembly Bill 57, in the Wisconsin State Legislature, describes itself as one that "prohibits certain individuals and parents who refuse to cooperate in determining the paternity of a child or establishing or enforcing a child support order from being eligible for FoodShare benefits." In reality, it's a whole lot more complicated than that.

Basically, the bill cuts off access to food stamps for parents who deny paternity or are more than three months late on child support. And while the concept of encouraging parents to take responsibility for their children — especially when it so often falls on the mother to do so — is nice in theory, the execution of this new proposed bill would likely cause greater numbers of impoverished Wisconsin residents, along with other harmful fallouts.

Rep. Joe Sanfelippo and Sen. Chris Kapenga authored the bill that was introduced back in February in the Wisconsin legislature. Sanfelippo describes the legislation as a sort-of insurance policy for deadbeat parents to have to step up. "This bill makes sure that somebody's standing behind me saying 'You brought a child into this world, you need to own up to your responsibility of caring for that child," he said, according to the Associated Press.

And while parents who have set up a payment plan of some kind with the state are exempt from the new bill, it's still hard to understand the reasoning behind such strict measures. Logically speaking, cutting someone in need off from federal assistance in any way only serves to heighten tensions and contribute to the poverty epidemic in America.

In addition, enacting this bill into law would cost roughly $412,500, according to the state Department of Children and Families, a figure that calls into question whether or not this legislation would actually save money, or bring families closer together.

The bill is currently under opposition from several groups in Wisconsin, and was subject to a public hearing Tuesday. However, it is still moving forward and does have the support of Wisconsin's Family Action organization, so it may be made law if more action isn't taken against it.

One organization that vocally opposes the bill, Hunger Task Force, explained to Romper the negative impact this legislation would have on Wisconsin residents. According to Executive Director Sherrie Tussler,

Hunger does not motivate people to be better parents. AB57 is a punitive bill that will harm children by taking away their parents' food buying power. AB57 is duplicative. Already there are well staffed Child Support Enforcement Agencies across the state that work with parents to assure child support is paid as ordered. These agencies also provide the support that families need during periods of financial turmoil, forgiving and amending orders during unemployment crisis. AB57 automates the process, serving as a robo cop removing local control from these agencies. AB57 is expensive, costing the taxpayers an additional $1.3 million. AB57 is bad for children, families, and the taxpayer.

In the end, the degrading concept of "deadbeat" parents in general is a bit of a sticky subject itself. As The Huffington Post's Joseph E. Cordell explained in a February,

Most of the fathers lumped in as deadbeats are not dads unwilling to support their children — they are simply unable to afford the child support. When 66 percent of all child support not paid by fathers is due to an inability to come up with the money, calling all the dads who miss payments “deadbeats” is painting with far too broad of a brush.

Whatever your feelings on so-called "deadbeat" parents (a derogatory term), or child support, or parenting in general, be careful to jump to conclusions too quickly about this bill. Because if it's passed, it could trigger some major consequences.