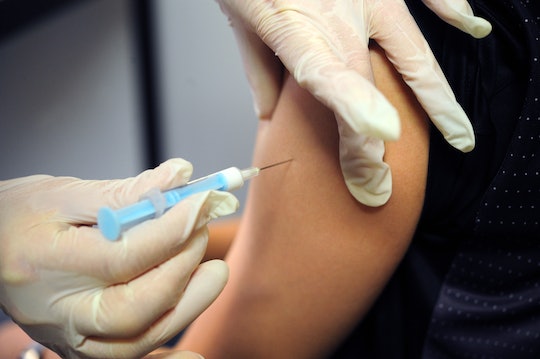 Deadly Diseases That Vaccines Prevent Your Child From Catching

In recent years, vaccines have become unexpectedly controversial, with the anti-vax movement growing louder and louder. The reluctance of some parents to vaccinate their children has led to scary consequences, like outbreaks of diseases that had previously been nearly-eradicated in the United States. Vaccines prevent your child from catching many deadly diseases, and it's important to know what they are, especially for when someone starts telling you that vaccines aren't that important.

According to the Centers for Disease Control and Prevention, just a few of those diseases include polio, measles, diphtheria, pertussis (whooping cough), rubella (German measles), mumps, tetanus, rotavirus, and Haemophilus influenzae type b (Hib). That's not even taking into account smallpox, a horrible disease which vaccines have eradicated completely outside of the lab. While for some children, these diseases can manifest themselves with symptoms like fever and runny nose, for others, the symptoms can be much, much worse. A lot of these diseases have the potential, ultimately, to be deadly.

Vaccinating your children is an important way to keep them safe from these preventable diseases. Still, it's easy to fall into a rabbit hole on the Internet, where people push theories that vaccines can cause everything from Autism to Sudden Infant Death Syndrome, despite research showing no link between vaccines and these diseases. It's incredibly irresponsible to make fear-mongering claims without the science to back them up, and yet people, including the presumptive Republican presidential nominee, do it all the time:

Vaccine fear has become so prominent that many have stopped inoculating their children, leading to high-profile outbreaks like the measles one in Disneyland in 2015. And perhaps the scariest thing about the spread of misinformation is that the subsequent outbreaks can affect children who have been vaccinated. While vaccination shots protect most children who are exposed to the disease, they don't work on every single one, so the best way to make sure children stay safe is to vaccinate everyone. So if enough of your neighbors decide they don't believe the science, your kid could be at risk.

Luckily, there seems to be some push back from those who have science on their side. An anti-vaccine documentary set to screen at the Tribeca Film Festival recently got pulled from the schedule after protests. And now, lawmakers in Canada are considering a bill to require parents who refuse to vaccinate their children to take a science class focusing on immunizations.

So make sure to do the research, talk to a doctor if you have concerns instead of relying on Twitter, and do your part to keep children safe from preventable diseases.